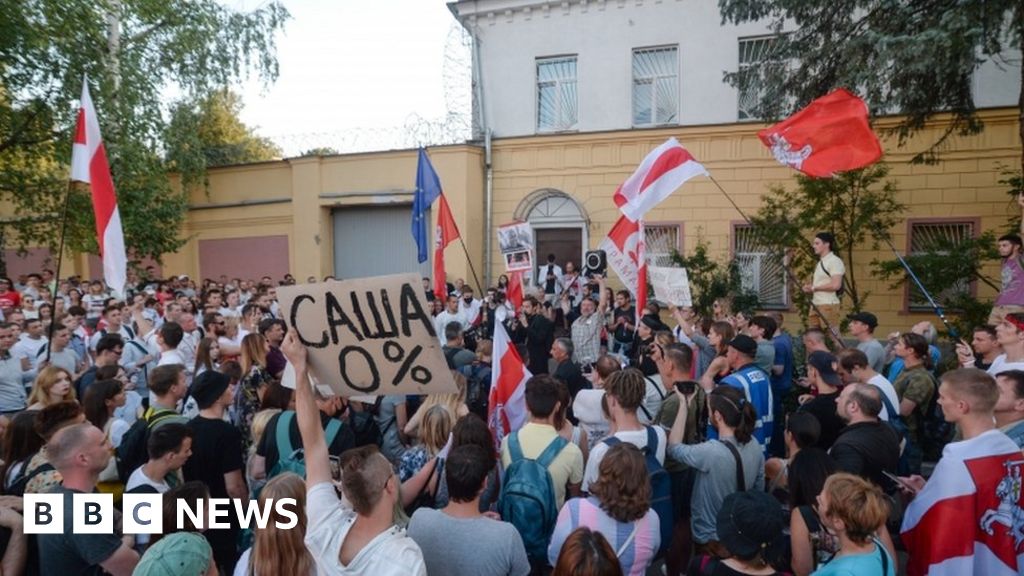 Protesters in Belarus have gathered outside a prison to mark the birthday of the jailed husband of the country’s main opposition figure amid anger over a disputed election.

Sergei Tikhanovsky, who has just turned 42, was imprisoned alongside other rivals of President Alexander Lukashenko ahead of the 9 August poll.

His wife Svetlana Tikhanovskaya ran in his place but later fled to Lithuania.

She officially secured about 10% of the vote, and Mr Lukashenko more than 80%.

There were no independent observers. The opposition has held daily protests over the past 10 days, alleging massive vote-rigging.

Hundreds of protesters have been wounded and two have died in clashes with police. Thousands have been arrested, and many have spoken of torture at the hands of security forces.

Mr Lukashenko, who has led Belarus since 1994, insists he has won fairly and has ruled out holding another election.

What happened on Tuesday?

Hundreds of opposition supporters gathered outside the jail in the capital, Minsk, where Mr Tikhanovsky is being detained on charges of inciting violence.

Many held red-and-white balloons, the colours of the opposition, while some chanted “happy birthday Sergei” and sang a song about prison walls coming down.

Ms Tikhanovskaya, 37, said her husband was spending his birthday in prison because of “a crime he did not commit”.

“All of this blatant lawlessness and injustice shows how this rotting system works, in which one person controls everything, one person who has kept the country in fear for 26 years, one person who robbed Belarusians of their choice,” she said in a video message.

Ms Tikhanovskaya says that where ballots were properly counted, her share of the vote ranged from 60% to 70%.

How strong is the pressure on Lukashenko?

On Sunday, more than 100,000 people gathered in Minsk for the largest protest held in Belarus since it declared independence from the Soviet Union in 1990.

Strike action is also keeping up the pressure on the president. State TV and key factories have been affected and on Tuesday postal workers reportedly joined the strikes.

A number of officials, as well as current and former police officers, have resigned.

On a visit to a tractor plant on Monday, Mr Lukashenko defended the official election tally, telling workers: “We held the election. Until you kill me, there will be no other election.”

But as he spoke, many in the audience booed him and chanted “leave”.

The 65-year-old, however, has remained defiant.

He has called opposition leaders “rats” and on Tuesday awarded medals “for impeccable service” to security officials who have helped him crack down on protesters.

Mr Lukashenko, who has maintained close ties with neighbouring Russia, has sought Moscow’s help, saying President Vladimir has promised to provide assistance in the event of any external military threat.

On Tuesday Mr Putin had phone calls with both Emmanuel Macron of France and German Chancellor Angela Merkel.

Both said the Belarusian government must start a dialogue with the opposition. Mr Putin told them that foreign interference would only escalate the crisis, Russian officials say.

On Monday, the UK said it did not accept the results of the “fraudulent” election and US President Donald Trump said his administration was following the “terrible situation” in Belarus closely.

More about the protests in Belarus