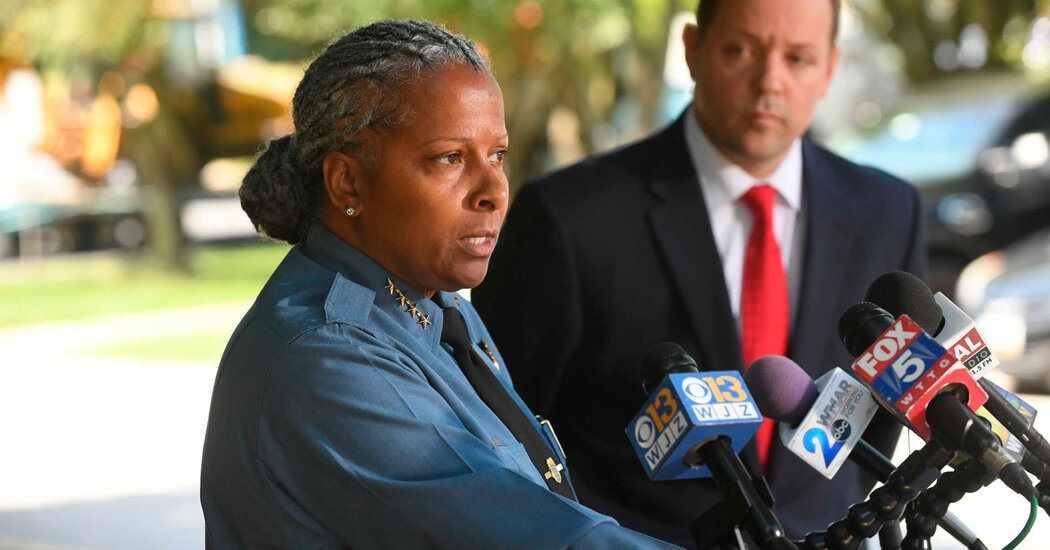 A Baltimore police officer has been charged with murder in the death of his 15-year-old stepson, whose body was found hidden in the officer’s attic last week.

The officer, Eric Banks Jr., 34, was arrested on July 6 on charges of assault on a police officer and trying to disarm an officer while the police were investigating his home, according to the Anne Arundel County Police Department. Officers discovered the body of a teenager, who was later pronounced dead. The cause was determined to be asphyxiation.

On Tuesday, Officer Banks was charged with first- and second-degree murder and first-degree child abuse resulting in the death of his stepson, Dasan Jones, who was known as DJ, the police said.

“This is absolutely a heartbreaking, traumatic and horrific case,” Chief Amal Awad of the Anne Arundel County Police Department said at a news conference on Wednesday. “We continue to lift DJ, and I ask that the community does the same.”

Chief Awad described DJ as “a young man with a bright future” who played the violin and had just completed his freshman year in a biomedical health program at Glen Burnie High School, which is about 10 miles south of Baltimore.

Warren Brown, a lawyer for Officer Banks, said he was awaiting the autopsy report of DJ’s death to learn how the teenager was asphyxiated.

“We don’t know if there is evidence of strangulation or of hanging, at least from what the police have released so far,” Mr. Brown said on Wednesday.

Shortly before 5 p.m. on July 6, Anne Arundel County police officers responded to a call about a child custody dispute, Justin Mulcahy, a spokesman for the department, said at the news conference.

A mother was in the area to pick up her teenage son who had been with his stepfather, the police said.

The officers were initially told by the stepfather, who was later identified as Officer Banks, that the teenager had left the home, leaving his belongings behind.

As the officers checked the place, they found the teenager “unresponsive” in an attic crawl space, Mr. Mulcahy said.

When the responding officers “secured” Officer Banks, he became combative and tried to disarm an officer, Mr. Mulcahy said.

The police said several more officers then responded to the scene to help take Officer Banks into custody.

During the altercation, Officer Banks said “my life is over” and “choke me, choke me,” according to the police.

At the scene, Anne Arundel County investigators collected items including “apparent bloody clothing” that was inside a dresser drawer.

Investigators interviewed several witnesses in connection with the death and performed forensic examinations of evidence taken from the home.

On Tuesday, the medical examiner ruled that DJ died from asphyxiation in a manner consistent with homicide.

Officer Banks was being held at the Anne Arundel County Detention Center without bail on the original assault charges.

Officer Banks, who has worked for the Baltimore Police Department since 2018, was “actively suspended without pay,” Chief Awad said.

“The alleged actions of Officer Banks are not only deplorable, but shocking to the conscience,” Commissioner Michael S. Harrison of the Baltimore police said. “Our department will continue to work closely with the Anne Arundel County Police Department during this ongoing investigation.”