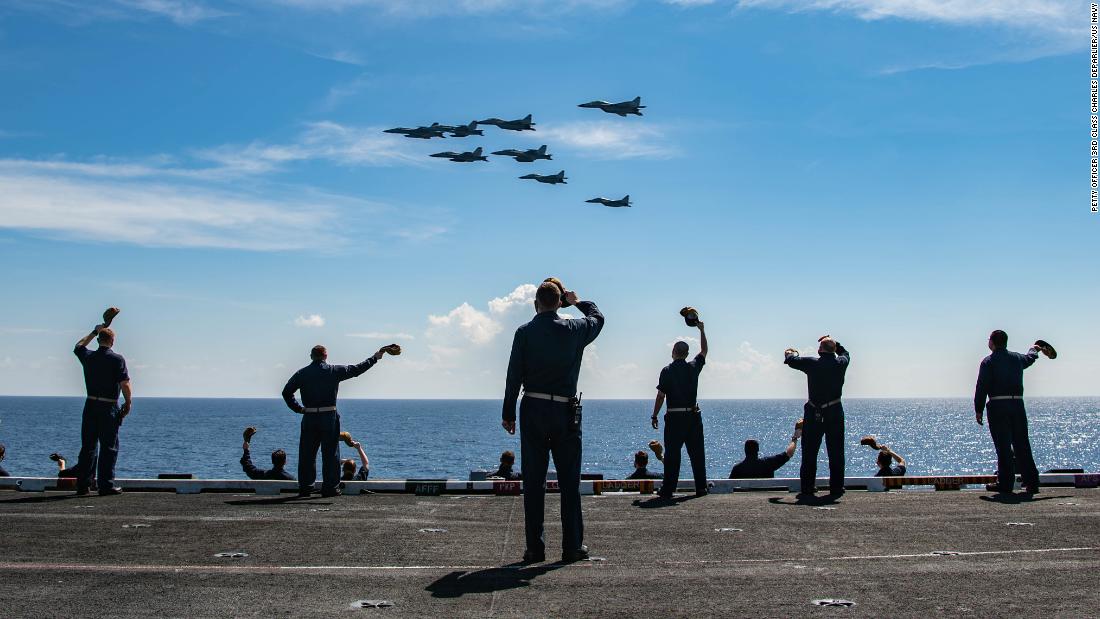 It will be the first time talks have been held between the heads of state of the four-member Quad and comes as all four countries see heightened tensions with China over a variety of issues.

The Quad, or Quadrilateral Security Dialogue, is an informal strategic forum for the four nations involved and has featured semi-regular summits and information exchanges.

While not a formal military alliance like NATO, the Quad is seen by some as a potential counterweight to growing Chinese influence and alleged aggression in the Asia-Pacific region. The collation has been denounced by Beijing as an anti-China bloc.

Morrison previewed the talks in a news conference last week.

“The Quad is very central to the United States’ and our thinking about the region,” Morrison said.

“This will become a feature of Indo-Pacific engagement. But it’s not going to be a big bureaucracy with a big secretariat and those sorts of things. It will be four leaders, four countries, working together constructively for the peace, prosperity and stability of the Indo-Pacific, which is good for everyone in the Indo-Pacific,” the Australian PM said.

On the military portion of the Quad, cooperation has been increasing over the past year through bilateral agreements between Quad partners and joint military drills.

Last November, Australia joined the annual Malabar exercises with the US, Japan and India. Conducted annually since 1992, the maneuvers have grown in size and complexity in recent years to address what the US Navy has previously described as a “variety of shared threats to maritime security in the Indo-Asia Pacific.”

The participation of Australia meant all four members of the Quad were involved in the drills for the first time since 2007.

All four have seen turbulent relations with China over the past few years.

Indian and Chinese troops were involved in a military clash along the Line of Actual Control — the de facto border between the two countries in the Himalayas — in June, which left troops dead on both sides after hand-to-hand combat.

Relations between Beijing and New Delhi have been frosty since, with both trade and technology disputes arising.

Japan and China remain at odds over the disputed Senkaku Islands. Beijing has increased the presence of its coast guard vessels near the uninhabited East China Sea islands, which are known as the Diaoyus in China.
Australia and China have seen relations plummet over a series of trade disputes.

The US, meanwhile, has increased the tempo of its naval and air missions in the South China Sea, while pushing back at Beijing’s claims to the vast waterway. It has also stepped up support of self-governed Taiwan, which Beijing claims as its sovereign territory.

Asia and China have been a key foreign policy focus of the Biden administration since it took office on January 20.

Last week, a State Department official and a diplomat from Asia said US Secretary of State Antony Blinken and Secretary of Defense Lloyd Austin will travel to Japan and South Korea from March 14 to 18.

It will be the first international trip by Biden Cabinet officials since the US President’s inauguration.

On Monday, Japan said Prime Minister Suga will visit the White House at the “earliest possible time,” while taking the Covid-19 situation into account, according to Chief Cabinet Secretary Katsunobu Kato.

Kato said in a daily press briefing Monday the Japan-US summit meeting would happen, but the date and details have not been decided.

If confirmed, Suga will be the first international leader to visit the White House under the Biden administration.

Blinken this month cited the US relationship with Beijing as “the biggest geopolitical test of the 21st century.” He said there is a need to engage China from a position of strength which can only be done alongside allies and partners.

“China is the only country with the economic, diplomatic, military, and technological power to seriously challenge the stable and open international system — all the rules, values, and relationships that make the world work the way we want it to,” Blinken said in the speech about the Biden administration’s national security strategy.