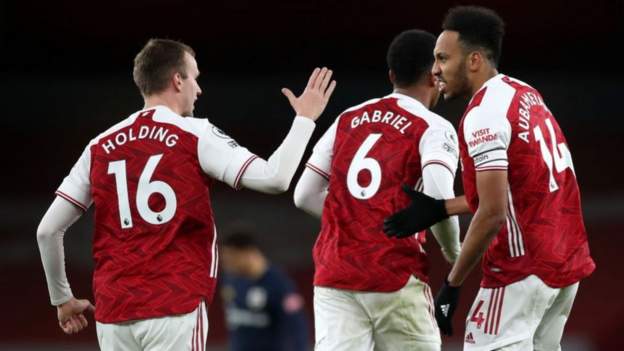 Ten-man Arsenal earned a point against Southampton to bring their three-match losing streak in the Premier League to an end.

Theo Walcott had opened the scoring on his return to his former club with a delightful dink over onrushing goalkeeper Bernd Leno.

Pierre-Emerick Aubameyang finished smartly after the break to level as Arsenal ended a run of 797 minutes in the Premier League without a goal from open play.

But the Gunners’ ill-discipline cost them once again as Gabriel was sent off after being booked twice in four minutes.

Substitute Nathan Redmond struck the crossbar soon after as Southampton pressed for a winner that would have moved them briefly top of the league.

The visitors could not make their pressure pay, however, and almost conceded at the other end late on when Rob Holding’s header rattled the woodwork.

The draw lifts Southampton above Leicester City into third.

Mikel Arteta’s side remain 15th in what is Arsenal’s worst start to a top-flight campaign since the 1974-75 season.

Arsenal boss Arteta has said his side cannot hide and “have to take the bullets” amid their worst start to a season for 46 years – what he did not want was another red card.

The hosts were starting to build some momentum after Aubameyang combined with Eddie Nketiah to finish coolly following smart footwork from Bukayo Saka.

But within 10 minutes they were down to 10 men, as Gabriel picked up a second yellow card for a foul on Walcott to earn Arsenal’s seventh sending-off in the Premier League since Arteta took charge in December last year.

The Gunners have not won in the competition since beating Manchester United at Old Trafford six weeks ago.

But, having named Arsenal’s youngest starting XI in the league since September 2012, Arteta will have been encouraged by the resilience shown by his team following Gabriel’s dismissal.

This was the Spaniard’s 50th fixture in charge of the north London club, and he has won more games in cup matches (14) than in the Premier League (13).

His side’s finish to 2020 does not let up with games against Everton and Chelsea in the league, and Manchester City in the EFL Cup, in the next 10 days, before a trip to Brighton.

Walcott scored 108 goals in 397 appearances in the 12 years he spent at Arsenal after joining from Southampton in 2006, with only Robin van Persie and Olivier Giroud having netted more than his 38 top-flight goals at Emirates Stadium.

With his career threatening to stagnate at Everton, the 31-year-old is back at his boyhood club on loan this term and flourishing in a Southampton side that is brimming with confidence.

The visitors dominated possession early on in north London and Walcott’s deft finish after 18 minutes came as they continued to stretch the Arsenal back line.

The goal came from Che Adams’ smart pass and the Southampton forward was a handful for the Arsenal back line throughout.

Saints boss Ralph Hasenhuttl said afterwards he was happy with a point but there must be a tinge of frustration his side could not take all three.