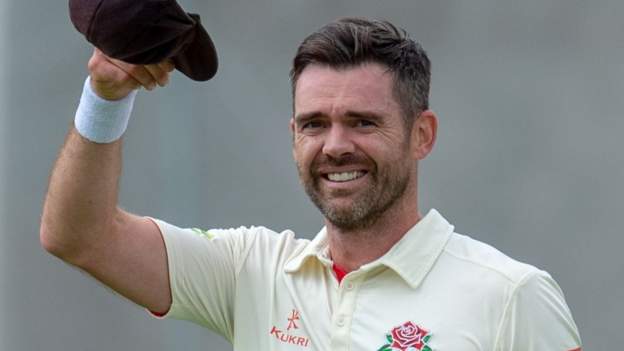 Anderson took a wicket in each of his first three overs, then added four more in his 7-19 as Kent collapsed to 34-8 – before more than doubling their score.

Bowling, appropriately enough, from the James Anderson End, the 38-year-old’s figures were his best at Old Trafford.

He beat his previous Manchester best of 6-49 against Worcestershire in 2004.

After taking the first five wickets to fall, Danny Lamb wrecked his chances of taking all 10, by getting the wicket of England batsman Joe Denly.

Lamb took two more to end up with 3-16 but, even by Anderson’s own high standards, this was really his day.

After the loss of day one, play did not get under way until after lunch, at 14:00 BST.

But Anderson, making only his second County Championship appearance of the summer, soon made up for lost time, with a combination of good line, good length, seam movement and a little swing.

England’s all-time top Test wicket-taker was finally taken off after bowling unchanged to take figures of 10-5-19-7 – all seven victims falling to edges, either caught behind – including four scalps for Dane Vilas – or in the slips.

Lamb also weighed in with two more wickets, the first that of 45-year-old Darren Stevens, caught at long-on, as Kent slumped to 51-9.

Stevens ended as top scorer with four boundaries in his 19 off 24 balls, before the best partnership of the innings, 23 between spinner James Logan, on his Kent debut, and New Zealander Matt Quinn.

Kent’s total of 74 was the second time they have been bowled out so cheaply, having also made just 74 in their second innings against Glamorgan in Cardiff in April.

Following a delayed tea interval, Lancashire then made a good start to their own first innings. They got within 10 runs of the Kent total before losing their first wicket, Alex Davies for a typically quickfire 47 off 43 balls, but then quickly slumped from 64-0 to 67-3 in the space of 18 balls.