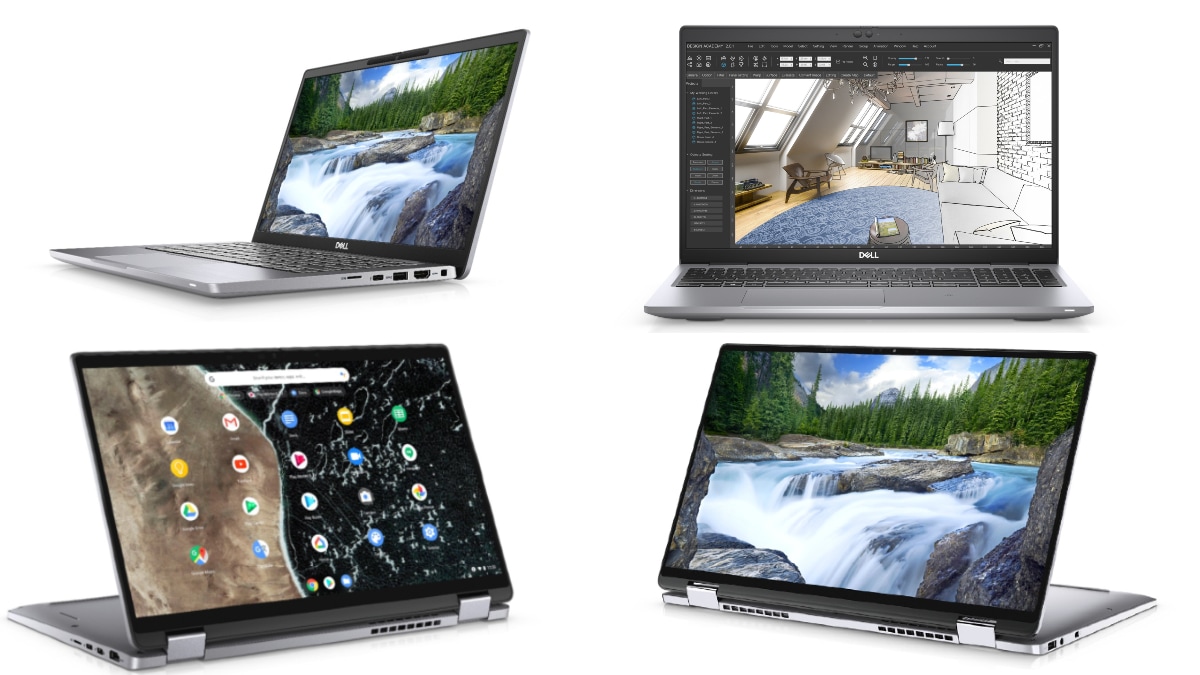 Dell Latitude 7410 Chromebook comes as a 2-in-1 option, runs on Chrome OS, and features a 14-inch full-HD (1,920×1,080) anti-reflective and anti-smudge display. The laptop is powered by the 10th generation Intel Core i7 quad core processor, paired with up to 16GB RAM, Intel UHD Graphics, and up to 512GB SSD. The laptop has up to 68Whr battery and connectivity options include Wi-Fi 6 and Bluetooth v5.1. Ports include two USB Type-C, two USB Type-A, one HDMI, one memory card reader, and one uSIM tray. Dell Latitude 7410 Chromebook comes with high quality speakers, universal audio jack, noise reducing dual array microphones, and RGB HD Camera with Dell Privacy Shutter.

Dell Latitude 9420 and Dell Latitude 9520 also come in a 2-in-1 form factor and have inbuilt speakerphone and camera enhancements to boost the quality of video calls. These are the first laptops to feature Dell’s SafeShutter technology that automatically opens and closes the webcam. In terms of specifications, Dell Latitude 9420 features a 14-inch display with up to QHD+ (2,560×1,600 pixels) resolution and touch support. Dell Latitude 9520 features a 15-inch full-HD (1,920×1,080 pixels) WVA touchscreen display. Both the displays also include optional Active Pen support to let you use a stylus.

Under the hood, the new Latitude laptops comes with up to 11th-generation Intel Core i7 processor, paired with up to 32GB LPDDR4x SDRAM and up to 1TB of SSD M.2 PCIe NVMe Class 35 storage. The laptop comes with Wi-Fi 6E and 5G LTE connectivity options and is based on Intel Evo platform. Dell Latitude 9420 and Dell Latitude 9520 laptops also use Intel’s Visual Sensing Technology to provide a reliable auto-wake and lock experience.

Dell Latitude 9420 and Dell Latitude 9520 come with up to 3-cell, 60Whr battery each that support up to 65W charging over USB Type-C. Ports include two Thunderbolt 4, one USB Type-A, one fingerprint sensor on the power button, one HDMI 2.0 port, one uSIM tray, one memory card reader, and more. There are four speakers on board, four noise cancelling microphones, and a universal audio jack.

The last in the Dell Latitude series includes the Latitude 5320, that also comes in a 2-in-1 form factor and features a 13.3-inch full-HD (1,920×1,080 pixels) display with touch support. It is powered by up to 11th-generation Intel Core i7 processors paired with up to 8GB RAM, up to 2TB SSD, and Intel Iris XE graphics. Ports include two Thunderbolt 4 ports, two USB Type-A, one HDMI port, and one universal audio jack. There is a microSD card slot, micro-SIM tray, smart card reader slot, and wedge-shaped lock slot. There is an integrated HD webcam and four speakers in total.

Built with reclaimed carbon fibre and bioplastics on the outside, Dell Precision 3560 comes with a 15.6-inch display with up to full-HD resolution and touch support. It is powered by up to Intel Core i7-1185G7 processor, with up to 64GB of DDR4 RAM and up to 2TB of M.2 2280 PCIe x4 NVMe Class 40 SSD storage. The laptop also comes with an option to have Nvidia Quadro T500 graphics with 2GB of dedicated memory. Further, it has an optional 4-cell 64Whr ExpressCharge battery to deliver long hours of usage on a single charge. Ports include two Thunderbolt 4 ports, two USB Type-A ports, HDMI 2.0, RJ-45, headset, microSD card reader, and fingerprint reader. The laptop weighs 1.59 kilograms.

Dell OptiPlex 7090 Ultra comes as a solution for customers exploring a compact desktop computer. It comes with a modular all-in-one design and is powered by up to 11th-generation Intel Core i5 processor. There is also up to 64GB of DDR4 RAM, along with up to 2TB of M.2 2280 PCIe x4 NVMe Class 4 SSD. The desktop comes with Intel UHD Graphics and Intel Iris Xe Graphics options. Dell has provided a range of connectivity options on the OptiPlex 7090 Ultra, with USB 3.2 Gen 2, USB 4, Thunderbolt 4.0, DisplayPort 1.4, and RJ45 connectors, among others. The desktop also includes Wi-Fi 6 as well as Bluetooth v5.1.

Although the OptiPlex 7090 Ultra doesn’t come with a display, it is compatible with a range of Dell Professional, UltraSharp, Collaboration, and E-series monitors. The machine can be used with up to four 4K monitors simultaneously. It also comes preloaded with Dell Optimizer to deliver a smarter desktop experience with personalised options.

Top-end specifications of Dell OptiPlex 3090 Ultra are similar to those of the OptiPlex 7090, though the former is targeted more towards small businesses and educators, with some key hardware-level differences. The desktop comes with up to 11th-generation Intel Core i5 processor, with up to 64GB of DDR4 RAM and up to 1TB of M.2 2230 PCIe x4 NVMe Class 35 SSD. The Core i5 variant also includes Intel Iris Xe Graphics. The machine is also compatible with various Dell Professional, UltraSharp, Collaboration, and E-series monitors. There are USB 3.2, DisplayPort 1.4, and RJ45 connectors as well as an audio jack. The desktop also offers up to Wi-Fi 6 and Bluetooth v5.1 wireless connectivity.