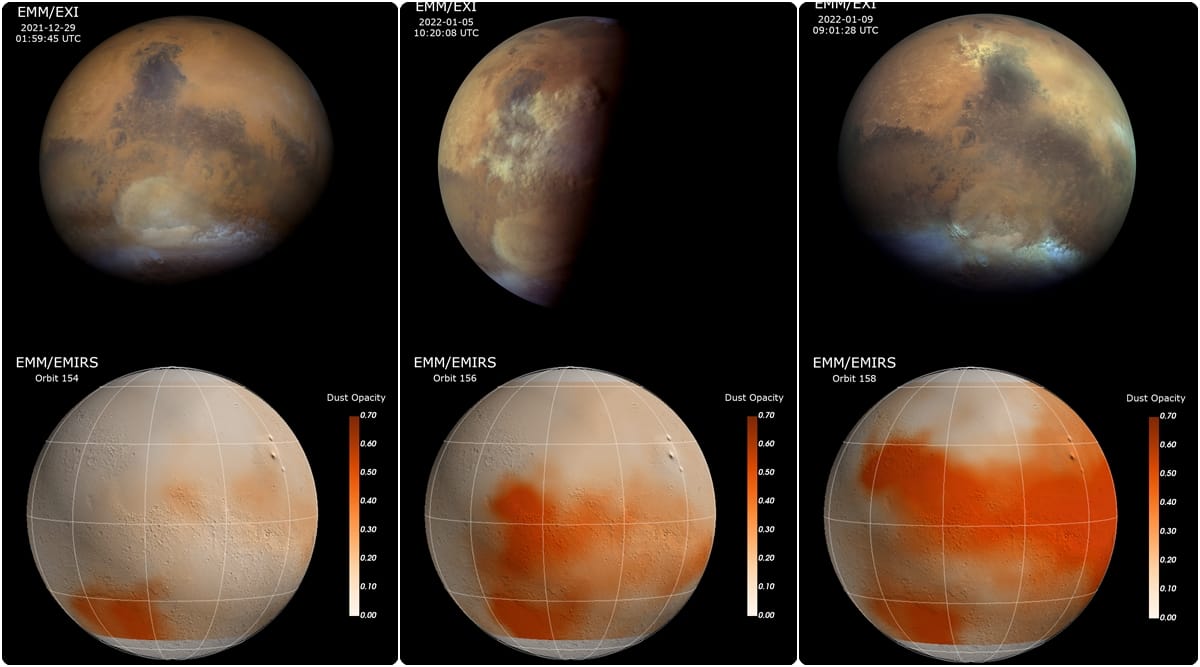 Since it reached Mars in 2021, the probe has been sending back important data and unique observations about the dust storms that occur on the Martian surface.

Emirates Mars Mission findings: The Amal or Hope probe to Mars was launched by the UAE in July 2020 with the aim of providing the entire picture of the atmosphere and the layers of the Red Planet. According to the UAE space agency, the Mission is meant to find answers to important questions about the Martian atmosphere and the hydrogen and oxygen gases it loses over the course of one revolution around the Sun. Since it reached Mars in 2021, the probe has been sending back important data and unique observations about the dust storms that occur on the Martian surface. According to a statement by the UAE Government, these observations give scientists “unparalleled depth of information and insight” into the evolution and spread of these dust storms across the planet.

The probe, which has an EXI camera system to collect images in a total of five wavelengths – two ultraviolet and three visible – and EMIRS interferometric thermal infrared spectrometer that helps in characterising the lower Martian atmosphere. The UAE space agency has said that the Hope probe started to monitor regional dust storms beginning in December last year with the help of the EXI and EMIRS, and over the course of time, these dust storms rapidly evolved, expanding to several thousand kilometres in size.

Over the course of nearly two weeks, Hope probe documented the growth and dissipation of the dust storm. In the images captured by EXI, and accessed by financialexpress.com, there is a prominent dark feature resembling the shark’s fin which is known as the Syrtis Major. This area has a gently sloping shield volcano, the surface of which is covered by dark basaltic sand’s deposits in thin layers.

Meanwhile, towards the south is a tan circular feature called the Hellas impact basin that is often hidden by water-ice clouds as well as dust.

On December 29, with the help of EXI and EMIRS observations, astronomers saw that, as is typical for the weather, the Hellas crater seemed to be filled with relatively thick dust clouds that appeared tannish while the suspended dust elsewhere was in lower amounts. Against this baseline, astronomers on January 5 observed that over the week, a massive dust storm that was spread about 2,500 km across had begun approaching from the east and was on that day obscuring the Syrtis Major partially. In this storm, astronomers also noticed water-ice clouds that were grey in colour, while the Hellas crater was completely hidden beneath the clouds of dust.

Captured at mid-day on January 7, EXI observations helped astronomers better understand the extent of the greyish water-ice clouds and the dust haze that was approaching from the east of Syrtis Major, and was extending towards the north of Hellas. The thickness of the dust haze was also found to be increasing with the help of EMIRS, which meant that the dust was being actively lifted from the surface of Mars at least up to 4,000 km from Syrtis Major towards the east.

On January 9, it was observed that the storm was crawling further westward, and over northwestern Syrtis, a multi-lobed dust storm was hovering across about 1,200 km.

The final observation on January 14 showed that there were no visible discrete dust storms, and only a dusty haze obscured, partially, the entire region of Syrtis and Hellas, while also extending towards the east. At this point, the amount of dust had also reduced largely, becoming a very thin haze.

Now, with the season on Mars moving towards southern spring, there is generally an increase in the pervasiveness of the dust storm activity that takes place on the Martian surface, the UAE government said. The EMM would be documenting the evolution as well as the location of the dust storms that occur on the Red Plant so that astronomers can understand the nature as well as the characterisation of these phenomena, it said.