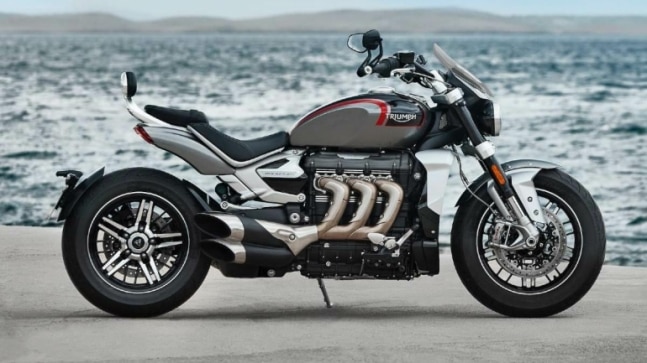 The Triumph Rocket 3 GT gets an improved BS6 compliant 2500cc motor that makes 221Nm of torque at 4,000rpm! Unlike the 3R the GT is more focused on touring and gets a more relaxed riding triangle

Triumph India has launched the new BS6 compliant Rocket 3 GT in India with a price tag of Rs 18.40 lakh (ex-showroom). The GT Badge is telling of this Rocket 3’s focus on touring, while the Rocket 3 R (that is already on sale in BS6 guise) is the roadster.

Like its road focussed sibling the Rocket 3 GT draws power from the same 2.5-litre motor in-line three motor as on the 3 R. This massive triple makes only 167bhp but pairs that with 221Nm of torque from a little a 4,000rpm. While power is up 11% over the previous rocket, it’s the torque that Triumph really want to sell. Specifically, enough to strip the concrete off the pavement before you even hit second gear! Triumph claim that the specific torque output is 71% higher than what you’d get from its closest competitor. Suspension and damping will be handled by a set of 47mm Showa upside-down forks with a Showa mono-shock at the back. Twin 320mm disc brakes up-front and a 300mm disc at the back will help reel in this 312kg (kerb) force of nature.

The 3 GT, as the name suggests, gets a more laid back riding triangle with forward-set footpegs and a slightly raised handlebar that is less of a reach than the forward set 3 R. The 750mm seat help keep the weight low and the bike stable under heavy acceleration from the aforementioned torques. In terms of touring-oriented features, the GT comes with a fly-screen, heated grips and also a height-adjustable backrest for the pillion. All the extra trimmings on the GT, add to a 3kg ballast for the GT over its bare-er roadster counterpart. The GT will be available in two colour schemes inclding a full-black called Phantom Black, a silver and grey called SIlver ice and Storm Grey. Bookings for Triumph’s new cruiser are now open officially across the country.