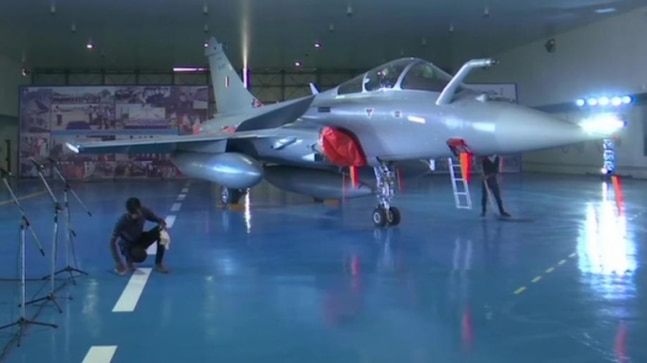 With a traditional ‘Sarva Dharma Puja’, air display and Sarang aerobatic team’s performance, the first batch of five Rafale fight jets will be formally inducted into the Indian Air Force (IAF) on Thursday in a ceremony in Ambala.

The event will be attended by top dignitaries of the Indian government as well as the French government. Defence Minister Rajnath Singh will accompany his French counterpart Florence Parly for the ceremony along with the likes of Chief of Defence Staff Gen Bipin Rawat, Air Chief Marshal RKS Bhadauria and Defence Secretary Ajay Kumar.

8.35 am: The Rafale jets are being readied at the Ambala air base for the induction ceremony which is slated to begin at 10 am today.

8.27 am: The Rafale fighter jets are India’s first major acquisition of fighter planes in 23 years. Sukhoi jets were the last imports made from Russia. The Rafale jets are capable of carrying a range of potent weapons. European missile maker MBDA’s Meteor beyond visual range air-to-air missile and Scalp cruise missile will be the mainstay of the weapons package of the Rafale jets.

8.10 am: ‘Sarva Dharma Puja’ will be performed at the induction ceremony of the first five Rafale fighter jets. French Defence Minister Florence Parly will be given the Guard of Honour on her arrival in Ambala. She will be accompanied by a team of French officials.

The Tejas Light Combat Aircraft will be performing an air display at the induction ceremony apart from the Rafale jets. The Sarang Aerobatic Team will also be performing at the induction ceremony in Ambala. Fly pasts will also be performed by two Sukhoi 30 MKIs and Jaguars. Defence Minister Rajnath Singh will be officially handing over the Rafale fighter jets to Commanding Officer 17 Squadron.

7.55 am: The formal induction of the Rafale fighter jets come at a time when India is engaged in a bitter conflict with China for several months along the Ladakh border. The latest skirmish was witnessed on Monday evening when the Chinese troops once again attempted to close in on a forward Indian position near the Pangong Lake.

7.30 am: “The program will include ceremonial unveiling of the Rafale aircraft, a traditional ‘Sarva Dharma Puja’, air display by Rafale and Tejas aircraft as well as by ‘Sarang aerobatic team’,” an IAF spokesperson said, describing the ceremony as a “very important milestone” in the history of the Indian Air Force. IAF Spokesperson Wing Commander Indranil Nandi said a traditional water cannon salute will be given to the Rafale fleet before its ceremonial induction into the 17 squadron of the force.

The first batch of five Rafale jets arrived in India on July 29, nearly four years after India signed an inter-governmental agreement with France to procure 36 of the aircraft at a cost of Rs 59,000 crore.

Ten Rafale jets have been delivered to India so far and five of them stayed back in France for imparting training to IAF pilots. The delivery of all 36 aircraft is scheduled to be completed by the end of 2021.

A second batch of four to five Rafale jets are likely to arrive in India by November.