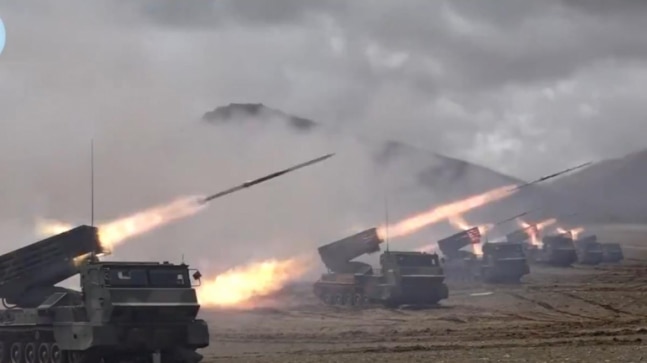 In an attempt to intimidate Indian soldiers deployed along the Line of Actual Control, China has been carrying out firing practices on its side of Tibet, the sounds of which can be heard as far as India.

China has released video of the live-fire drill carried out by the PLA in Tibet. (Photo: Twitter/globaltimesnews)

Top government sources have revealed that Chinese Army is carrying out firing practice well within territory controlled by them in Tibet but it can be heard on the Indian side at many locations along the Line of Actual Control (LAC) from Ladakh to Arunachal Pradesh.

China’s attempt seems to be to create psychological pressure on Indian troops deployed across the LAC.

A brigade under the #PLA Tibet Military Command conducted live-fire drills at an altitude of more than 4,900 meters; they included precise strikes with missile-gun integrated weapon systems, combined strike systems, and all-dimensional assaults, among others. pic.twitter.com/wt38kCxzWZ

India has strengthened its defences along the positions occupied by the Indian Army near Rezang La and Rechin La heights by putting concertina wires and Chinese troops have been warned that there would be consequences if they try to breach Indian defence, the sources said.

The Indian side has also taken up the issue of Chinese army soldiers carrying stick machetes and spears along with them during the deployment close to the Indian positions during talks at the Brigade Commander-level held between both sides, the sources said.

Sources said the Chinese army has deployed close to 50,000 troops along with heavy tanks and artillery.

Sources also said that opposite the Indian side of Chushul, the Chinese have been lining up their tanks and infantry combat vehicles within their territory near the friction areas as they have brought in a lot of heavy weaponry to the area, they said.

Commanders of the armies of India and China on Wednesday met in eastern Ladakh and also exchanged messages over the hotline on ways to check further escalation in border tension government sources said.

The sources said the situation in eastern Ladakh remained “tense” and that around 30-40 soldiers of China’s People’s Liberation Army(PLA) are holding up at a position close to an Indian post in the Rezang La ridgeline in eastern Ladakh.