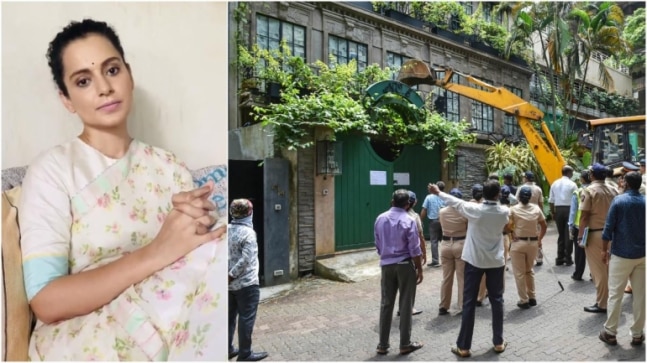 The war of words between Bollywood actor Kangana Ranaut and Shiv Sena took a grave turn on Wednesday as the Brihanmumbai Municipal Corporation demolished a part of her bungalow at Pali Hill in Bandra.

The BMC said that the demolition work was carried on the illegal alterations in the bungalow, however, the actor and her lawyer claimed that the corporation was lying and she was being targeted because she spoke against ‘move mafia’ in ‘Bullywood’. In a series of tweets, Kangana Ranaut accused Uddhav Thackeray of cruelty and compared her plight with Kashmiri Pandits.

The BMC action against the actor’s property kicked up a storm on social media as several politicians and Bollywood personalities slammed the municipal body for ‘selective action’ against Ranaut.

While the BJP accused the Uddhav Thackeray government of indulging in vendetta politics, the NCP leaders said that the BMC was justified in demolishing the property if they followed the law. Several Bollywood actors and filmmakers, including those who have been vocal critics of Kangana, slammed the BMC for demolishing the actor’s office.

However, the BMC seems to be undeterred by the Twitter din as it has requested the court to lift a stay on the demolition of the building where Kangana Ranaut residence is located.

The BMC, which is ruled by Shiv Sena, on Wednesday pulled down the alleged illegal alterations at the Bandra bungalow of Bollywood actress Kangana Ranaut before the Bombay High Court ordered a stay on the process.

On Tuesday morning, the BMC had issued a stop-work notice to the “ongoing renovation and finishing work” of Ranaut’s office on Nargis Dutt Road. On Wednesday morning, the civic body posted another notice outside her bungalow, informing her about the action it would be taking.

Kangana, who returned to Mumbai on Wednesday afternoon from her home state Himachal Pradesh, tweeted some of the videos and photos of the demolition process. “I am never wrong and my enemies prove again and again this is why my Mumbai is POK now,” Kangana tweeted, soon after the demolition work began.

I am never wrong and my enemies prove again and again this is why my Mumbai is POK now #deathofdemocracy pic.twitter.com/bWHyEtz7Qy

Taking on the Shiv Sena, Kangana called her home Ram mandir, referred to several movie celebrities as ‘Bullywood’ and described herself as the daughter of Chhatrapati Shivaji.

The actor said she is working on a project on Ayodhya but now understands the pain of Kashmir Pandits and will also make a movie on their plight.

“Uddhav Thackeray, ‘tujhe kya lagta hai’ (what do you think)?. You think you have taken a huge revenge by destroying my house in collusion with the movie mafia. Today my house is destroyed, tomorrow it will be your ego. The wheels of time keep changing, she said in a video message in Hindi, referring to the chief minister in the informal tu’ rather than the more respectful aap’.

“Uddhav Thackeray, this cruelty and terrorism, it is good that it happened to me because there is some meaning to it,” she said in the video.

In a series of posts earlier in the day, Ranaut said there has been no “illegal construction” in her house. “… also government has banned any demolitions in Covid till September 30, Bullywood watch now this is what Fascism looks like #DeathOfDemocracy #KanganaRanaut,” the actor tweeted.

In another post, she wrote, “I am never wrong and my enemies prove again and again this is why my Mumbai is POK now #deathofdemocracy”.

This is the second time she has referred to Mumbai as PoK, a statement that sparked the spat with the Shiv Sena.
Ranaut also shared few photographs of BMC officials at her house, with the captions “Pakistan…#deathofdemocracy” and “Babur and his army #deathofdemocracy”. The actor posted past photos from the building, calling it her own “Ram Mandir”.

“Today Babur has come there and history will repeat itself. Ram temple will be broken again but remember Babar, this temple will be built again. Jai Shri Ram,” she tweeted. Calling herself the daughter of Chhatrapati Shivaji, Ranaut claimed that she was fighting for her “honour and dignity”.

“I have lived the courage, valour and sacrifice of Rani Laxmibai through my film. The sad thing is that I am being prevented from coming to my own Maharashtra. But I will follow the path of Rani Laxmibai. I will not get scared or bow down to anyone. I will continue to raise my voice against wrong, Jai Maharashtra, Jai Shivaji,” she said in another post.

Almost one-and-half-hour after the demolition work began, the Bombay High Court issued stay order, saying that the civic body’s conduct was “malafide” and “deplorable”. A division bench of Justices S J Kathawalla and R I Chagla asked why the BMC gave only 24 hours to Ranaut to respond to its stop-work notice and went on to take action when she was outside Maharashtra. The court was hearing a petition filed by Ranaut challenging a notice issued by the BMC for “illegal’ construction at her bungalow.

Talking to reporters outside the actor’s office after the stay order, her lawyer Rizwan Siddiqui said, “The BMC is lying. It’s lying on record (about illegal construction at the bungalow). They said they have given stop-work notice. But such notice is given when the construction process is underway.”

After the court’s statement was made public, Kangana said that it has been proved that she is being bullied for exposing drug racket and questioning shoddy investigation in the Sushant Singh Rajput case.

“Now that high court has declared it is a clear case of bullying and its done right after I exposed drug racket, questioned shoddy investigations of SSR murder one can see freedom comes with a price, I am paying for mine are you paying for yours?” Kangana Ranaut said in a tweet.

Speaking exclusively with India Today TV, BMC officials said that the action was taken following all rules and regulations.

Officials added that they were surveying several houses in the Bandra area and one of them was Kangana Ranaut’s office where they found irregularities.

However, the BMC officials did not comment on why the office was demolished in a hurry, without the presence of the owner.

Undeterred by raging controversy over Wednesday’s demolition, the BMC has requested the court permission to demolish a building in Khar West. Kangana Ranaut owns and apartment in the building.

The BMC has filed an affidavit asking for the removal of stay on the demolition of the building where Kangana Ranaut residence is located. This affidavit was filed on Monday before the Dindoshi sessions court.

This case pertains to illegalities that the BMC had seen and had sent a notice to the builder in 2018. The people who purchased the flats in the building including Ranaut had also been served notice. The society in 2018 had moved an application to stay the notice of demolition that was sent by BMC.

In 2018 itself, BMC was asked to file a reply but they never did until now. Now they have filed an affidavit asking for the removal of this stay.

Rizwan Siddiqui, advocate for Kangana says, “We are nowhere related to this case. It is a case between the BMC and the builder and society. The advocate representing the society is not even known to us and is not even being paid by us. It is nowhere connected to Ranaut.”

The BMC has also informed the court that a notice was given to Kangana Ranaut in 2018 regarding violations of FSI for her residence at Khar West as well. However, the notice was stayed by the court after Kangana Ranaut had challenged it. Officials said that once the stay is vacated, they will initiate demolition.