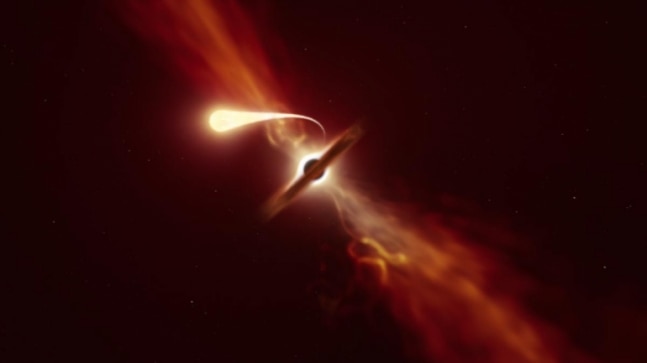 In a development that could have significant impact on our understanding of the black holes and formation of starts, astronomers have been able to capture a moment when a supermassive black hole shredded a star nearly the size of our sun.

Images of this moment were released on Monday and they show the devastating process in unprecedented detail, news agency AFP reported.

To capture this moment, astronomers used telescopes from the European Southern Observatory (ESO). “They were able to monitor light flaring from the process – known as a tidal disruption event – from a black hole just over 215 million light years from Earth,” the report said.

It added that using these telescopes, astronomers were able to observe the star being “physically torn apart” as it was sucked into the black hole’s giant maw.

“The idea of a black hole ‘sucking in’ a nearby star sounds like science fiction,” Matt Nicholl, a lecturer and Royal Astronomical Society research fellow at the University of Birmingham, and lead author of the study was quoted as saying.

He added, “But that’s exactly what happens in a tidal disruption event.”

He explained that when a star strays too close to a supermassive black hole, it gets subjected to the phenomenal strength of the black hole’s gravity.

In this process, the star can actually be physically torn apart and its matter pulled into long strings, a process known as “spaghettification”.

Speaking about the star that was engulfed and shredded by the massive black hole, Nicholl said observations suggest that the star had roughly the same mass as our own sun.

The black hole was “a monster… which is over a million times more massive”, he said.

What astronomers captured on Monday was not the first time that a tidal disruption event was observed. However, it was significant because the experts discovered the event just a short time after the star was ripped apart and hence the team were able to pinpoint how the obscuring debris forms, the AFP report said.

The Nobel committee said this was “one of the most exotic phenomena in the universe”.

(With inputs from AFP)

ALSO READ | Fiery red Mars in sky: Red planet to be at its brightest tomorrow night

ALSO READ | Earth to get mini moon in November or is it just space junk from 1960s?