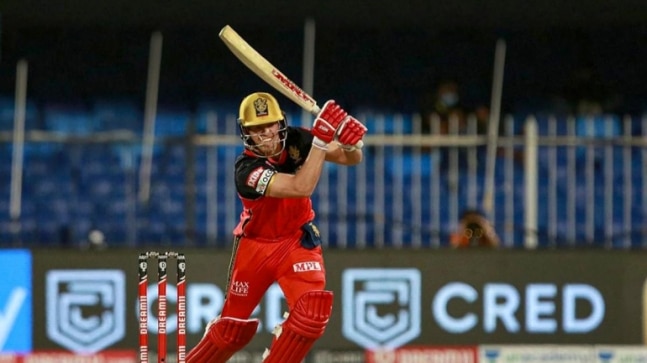 Royal Challengers Bangalore opener Aaron Finch joked about batting longer during their Indian Premier League (IPL) 2020 outing against Kolkata Knight Riders after seeing AB de Villiers go hammer and tongs towards the end of their innings in Sharjah on Monday.

Aaron Finch who was looking to find form got off to a fine start, putting pressure on the KKR bowlers but he slowed down after the powerplay as the Sharjah pitch slowed down considerably as well as the ball got a bit older. Finch eventually departed for 47 from 37 balls.

Finch’s departure brought AB de Villiers into the middle and the equation changed completely. AB de Villiers was in the mood to hit some big sixes right from the word go. He made batting look easy on a wicket where even his partner Virat Kohli was struggling to get the timing right.

Perhaps, I should have gotten out earlier: Finch’s ultimate compliment to ABD

Kolkata Knight Riders had done well to put the brakes on RCB’s scoring rate after the wickets of openers Finch and Devdutt Padikkal who had put on 67 for the 1st-wicket stand. However, de Villiers came up with one of the most memorable big-hitting knocks of IPL 2020.

De Villiers hit 6 sixes and 5 boundaries as he hit one of the best bowlers of the moden-era, Pat Cummins, to the cleaners. He continued treating KKR bowlers with disdain as he hit 73 from just 33 balls. Thanks to de Villiers’s fireworks, RCB managed 194 in 20 overs, 83 from the last 30 balls on a sluggish wicket.

“As the ball softened, the sheen went off and it became a bit tougher, they bowled the cutters and the slower balls during the middle phase of the innings, it became tough to hit. He (AB de Villiers) is a special batsman, when a guy can hit it all around the park like that without even doing anything – his sheer presence out there puts the pressure on the opposition, he makes the pitch look easy,” Finch said.

“Perhaps, I should have got out earlier. At one stage, we thought 180 was a good score on this ground, we have 194 which is a competitive total.”

When AB de Villiers was going great guns at one end, Virat Kohli was struggling to get boundaries. The man, who had hit 90 from just 52 balls the other night in Dubai against Chennai Super Kings, hit his first boundary in the 25th ball he faced. After the ball flew off his outside edge, Kohli punched the air in delight. It was an absolutely special innings from Mr. 360 who was at it again!