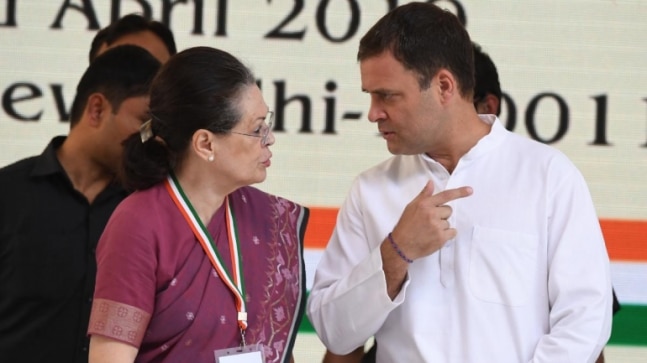 There are some signs of a truce in the ongoing impasse between the 23 dissenters in the Congress party and the parent organisation. Some Congress leaders, who are acting as mediators between those who wrote a letter questioning the Congress leadership’s style of functioning and the AICC functionaries, are trying to bring the two sides on a negotiating table.

It is believed that interim party president Sonia Gandhi is open to the idea of hearing out the dissenters in exchange of a promise from them that they will not to cross the ‘Laxman Rekha’ of party discipline.

Based upon interaction with multiple sources, it appears that the dissenters’ main demand is to get a firm commitment from Rahul Gandhi that either he would openly declare himself as contender for the party’s top post or stop a section of Congress leaders from making such a demand.

Interestingly, almost half of the 23 dissenters, have no objection to Rahul Gandhi returning as 87th president of the AICC. What they resent is his unwillingness to become a 24×7 politician and his tendency to run the party organisation by “proxies”.

Congress sources say Sonia Gandhi’s initial anger against the dissenters is receding and she is willing to hold talks with them, perhaps during the upcoming Parliament session starting on September 14.

In her scheme of things, the dissenters should select among themselves two representatives willing to discuss the issues raised by them in their letter. Sonia Gandhi is also serious about holding party polls and wants all ‘stakeholders’ to contest elections to the Congress Working Committee (CWC).

However, the dissenters first want clarity on the top post i.e. whether Rahul wants to be a contender or let members of non-Gandhi family to vie for the top post.

Congress party sources say this issue is laced with many possibilities and also has the potential of causing a split in the grand old party.

Rahul Gandhi joined politics in early 2004, but until now, he has remained somewhat unconventional, with a detached sense towards power and politics. His training in rigorous Buddhist Vipassana is perhaps responsible in not making him hungry enough for power.

For weeks and months, the dissenters had been trying to draw Sonia Gandhi’s attention towards Rahul’s inability to take all factions of the party along. Rahul’s preference towards NGO types [read as Madhusudan Mistry, CP Joshi, Mohan Gopal, K Raju] and left of centre ideologues [Alankar Sawai, Apoorvanand, Sandeep Singh, Sachin Rao, Kaushal Kishore Vidyarthee are some of the marked persons] is a constant source of unease.

Rahul Gandhi was a student at Trinity from October 1994 to July 1995 and was awarded an MPhil in Development Studies. Cambridge seems to have influenced Rahul quite a bit.

Speaking to the Cambridge campus paper Varsity in 2010, Rahul had told Merrow Golden and Ashleigh Lamming, two political science students, that he disagreed with a lot of what he was taught at Cambridge. “I am a lot less left-wing now than I was, for one thing.”

Ten years down the line, Congressmen shudder to think what was Rahul Gandhi’s original thinking if his current state of mind is a “lot less left-wing”.

Sonia Gandhi had herself faced the challenge to carry everyone along in 1998 when she had formally taken over as Congress president. Breakaway Congress factions headed by Arjun Singh-ND Tiwari, Madhavrao Scindia and S Bangarappa had joined the parent organisation then.

Some of these leaders had tried to settle scores with PV Narasimha Rao and Sitaram Kesri loyalists but Sonia Gandhi had sternly discouraged them, pointing that as head of the ‘Congress parivar,’ she was ‘duty-bound’ to act even-handedly.

The second part of the complaints against Rahul Gandhi is about the choice of issues that are being raised.

It has been over a year since the group was named, but barring one meeting on October 25, 2019, it has not met. Instead, Rahul has been selecting and raising issues on his own ‘whims and fancies’.

In nutshell, Rahul’s personality and his choice of issues are a primary source of disquiet in the party.

When a group of dissenters had begun talking among themselves to force change and reform from within the party, one of them had quipped, “assuming that the Congress is a body, we need to figure out where the problem lies – is it the head, chest, stomach, kidney, liver.? Three of them had responded in unison: “it is the head!”

The present-day Congress doesn’t lack leaders who want a Rahul-led Congress to taste every electoral success but wish he fails in his efforts to cleanse the party.

This paradox is the biggest challenge before Rahul and Congress.