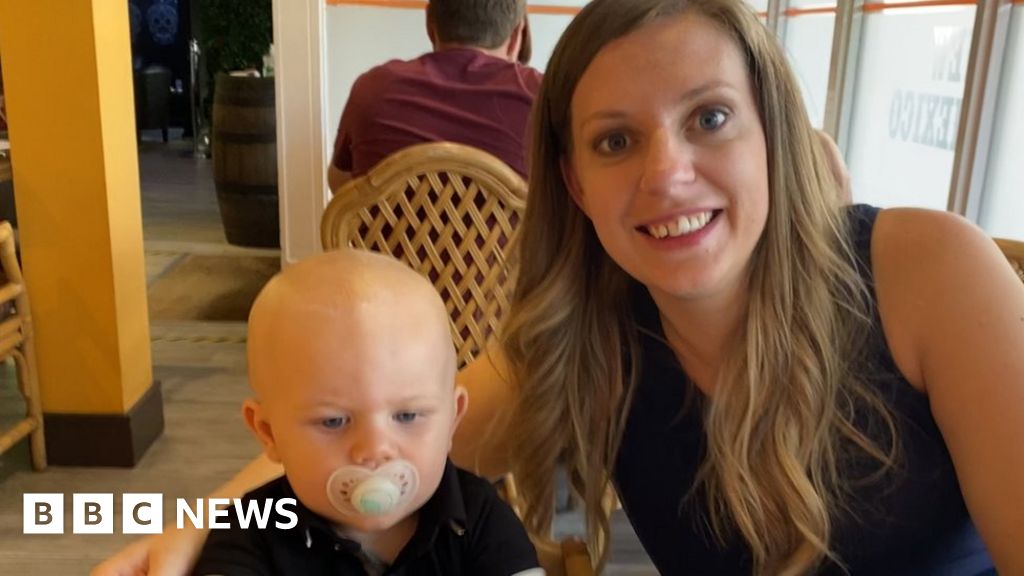 Many new parents are facing mounting debts, childcare issues and mental health problems due to coronavirus, according to campaigners.

More than 270,000 people have now signed petitions for parental leave to be extended by three months.

Three women speak of their experience of being on maternity leave during the pandemic.

‘I haven’t got a support network’

Kirsty Pearce knew she would have to be careful with money while on maternity leave with her baby, but she did not expect to have to rely on family handouts and credit cards.

The learning support assistant, from Harlow in Essex, was meant to return to work at a primary school in June.

Instead, she said she had been forced to take unpaid leave and stay at home with her baby, because she was not able to find him a nursery place.

“It has been so stressful and we are getting into debt,” she said.

Her maternity leave with son Jake, now 10 months old, has been a world away from what she experienced with her 12-year-old daughter.

Social distancing has put paid to hands-on support from family and friends, while baby groups and clinics have closed their doors.

“It’s just not how I imagined my maternity leave would be. Jake hasn’t seen a health visitor since he was eight weeks old.

“Twelve years ago, I had a lot of support and this time I feel I haven’t got a support network.

“It has been really hard knowing you can’t just ask your mum to come round and help you out, and I’ve also had to home-school my daughter.”

Her husband works in a warehouse, but Ms Pearce said his income alone was not enough to support the family.

Jake has now got a nursery place lined up for next month and Ms Pearce will be able to return to work, but they still have debts hanging over them and concerns about his wellbeing.

“I just hope Jake can settle in because he has separation anxiety, which is understandable because he has only ever been with me. He screams when I even leave the room, so I am really worried,” she said.

‘We have missed out on so much’

Mother of twin boys, Charlotte Hamshere-Malyon said she knew it would be difficult having twins, but “never expected it to be this hard”.

She gave birth to Harry and Jack in November and had to return to theatre because she had retained some placenta.

It was “very traumatic” and the placenta was not entirely removed, meaning she needed a further operation. She still suffers from flashbacks and health complications.

She said that experience, coupled with the lockdown, had a dramatic impact on her mental health.

“I have felt so isolated. Because of my health, I only managed to get out of the house with the twins once before the lockdown happened. I have really needed support and it has just not been there,” she said.

“It has been so hard not being able to see my parents – the boys do not know them at all and that is heartbreaking.”

She was diagnosed with post-natal depression, anxiety and post-traumatic stress disorder, but has only been offered an online therapy course, which she said had not helped her recovery.

The NHS administrator, who lives in Bromley in south east London, said her maternity leave had been so different to the one she experienced with her older son.

“I took him to baby yoga, baby massage, play groups, but we have just been stuck in the house.”

She is currently on unpaid leave, with the thought of returning to work in October making her “extremely anxious”. She has not been able to secure nursery places for the twins.

“If the leave was extended it would give us the opportunity to go and do all the things we haven’t done. We have missed out on so much.”

‘My baby hasn’t been held by anyone else for months’

New mother Bethany Power set up a petition for parental leave to be extended after feeling abandoned during her maternity leave with her eight-month-old son Jayden.

She was due to return to work as a rehabilitation specialist next month, but has delayed it until November and will take unpaid leave.

“I’m not ready. I can’t get back to work eight hours a day and just plonk my baby somewhere. My baby hasn’t been held by anyone else for months.

“All the stuff we would be doing, like settling-in sessions at a nursery, just isn’t happening.

“I can’t find childcare – the nurseries are closed, or they have reduced the number of babies they can take, or they are not taking any new babies until at least October.”

Ms Power, of Rochester, Kent, has not received the post-partum physiotherapy she was meant to have for two prolapses following her traumatic labour, due to non-urgent medical care being cancelled.

Jayden suffers with reflux and was due to receive cranial therapy, which was also put on hold. Her key worker husband has been busy at work, leaving her feeling “alone and anxious”.

She said: “No-one is able to help because of social distancing and there are vulnerable people in the family so we can’t risk it.

“A lot of parents have really struggled. We haven’t had the support we would normally get and we’ve been abandoned by the government.”

At the moment, women are able to take a year’s maternity leave and receive statutory pay for 39 weeks, while parents using shared leave are entitled to 50 weeks with 37 weeks’ pay between them.

The government provided a written response saying it had no plans to extend the leave, but a subsequent Petitions Committee report recommended that it should be extended for all new parents affected by the pandemic.

Catherine McKinnell, chairwoman of the committee and Labour MP for Newcastle North, said parents coming to the end of their leave were facing a “dreadful dilemma” and some have had to give up their jobs.

“This is having a profound impact on the mental health and wellbeing of families,” she said.

The committee estimates it would cost approximately £966m to extend the leave, with nearly half a million people affected.

A government spokesperson said: “The UK has one of the most generous maternity leave offers in the world, but we understand this is a difficult period for new and expectant mothers.”

It has until September to respond to the inquiry. For many parents, the decision cannot come soon enough.

“We are facing the prospect of returning to work with limited childcare options and babies who have not socialised outside our homes. This is a national crisis. We need help and we need it now,” Ms Power added.