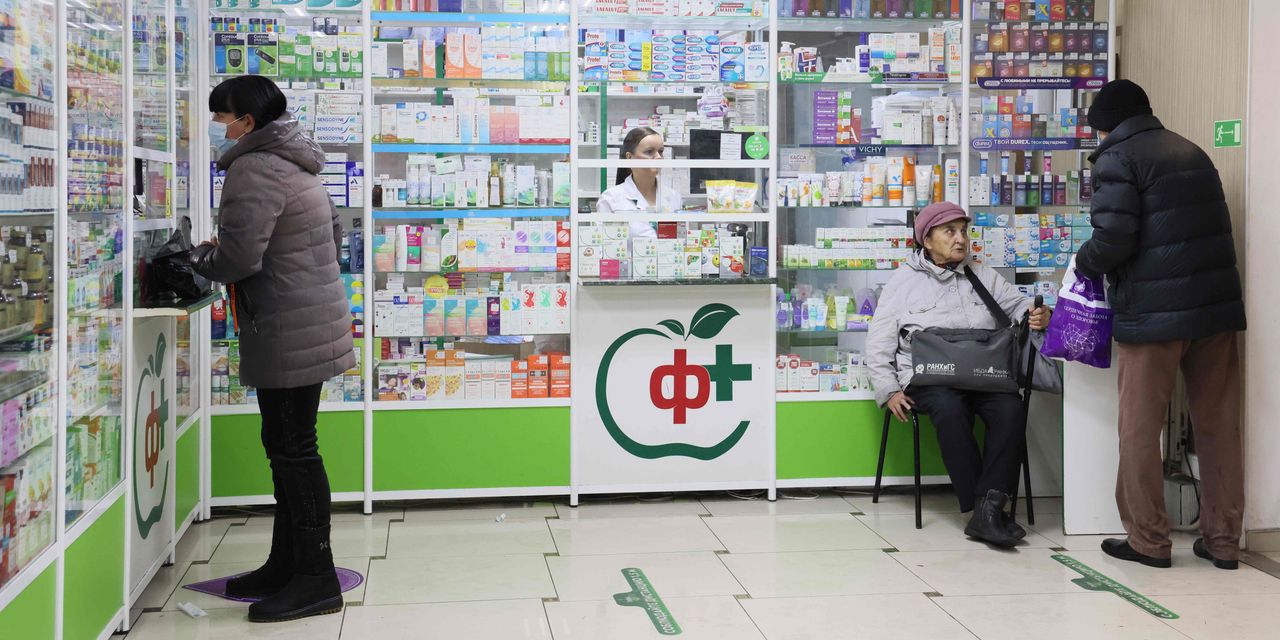 Healthcare companies say they are duty-bound to continue supplying drugs, vaccines and medical equipment to Russia, though Western sanctions and other measures have thrown up hurdles.

The Ukraine invasion has prompted Western car makers, luxury-good purveyors and other companies to leave Russia. Makers of drugs, vaccines and medical equipment continue to do business, however, saying they have an ethical responsibility, though some drug and device firms have spoken out against the invasion and scaled back operations.

“If our products don’t get to the patients in need, people will die or have severe consequences,”

said at an investor conference Tuesday.

Johnson & Johnson, which sells drugs and medical devices, plans to continue to provide what it said are essential products to Russia. Drug distributor

said it has stopped doing new business in Russia, though it will keep distributing certain cancer drugs and finish clinical trials.

drug and crop divisions are still operating in Russia. Withdrawing seeds, pesticides and other products, a company spokesman said, would exacerbate food shortages arising from the conflict due to the important role of Ukraine and Russia in the global wheat supply.

“A suspension of deliveries for cancer or cardiovascular patients would not be ethically justifiable and would heavily impact the civilian population of Russia,” the spokesman said.

Russia isn’t a big market for Western healthcare companies. Sales in the country account for less than 2% of the companies’ world-wide total, according to analysts and companies. Russia imported about $700 million in U.S. pharmaceutical products last year, according to

Some 80% to 85% of Russian-made drugs, however, depend on imported ingredients, according to RNC Pharma, a Moscow-based market research company. Russian pharmaceutical companies are struggling to import the main ingredients, said Pavel Rasshchupkin, RNC’s commercial director.

Medicines haven’t gone into shortages so far, but the devaluation of the ruble has driven up prices, Mr. Rasshchupkin said. Pharmacies are seeing panic buying, he said.

on Tuesday signed into law new “anticrisis” measures, among which were policies aimed at boosting supplies of domestically-made medicines and medical devices in the country, such as the option to ban exports of certain drugs. An Interfax news agency report on the law didn’t specify vaccines.

Many Western drugmakers have issued statements voicing opposition to the Russian invasion, expressing support for Ukranians and making donations to help Ukraine and refugees.

, which have continued most activities in Russia, are among drugmakers that say they have paused enrollment in clinical trials in the country.

Should drug companies continue to do business in Russia? Why or why not? Join the conversation below.

PLC said it wouldn’t enter into any contracts that support the Russian administration or military, such as agreements to supply vaccines for military immunization drives, a spokeswoman said.

NV has stopped selling consumer products like electric toothbrushes in Russia, but continues to supply medical equipment, a spokesman said.

Some 300 biotech CEOs signed a pledge to halt business development in Russia. “The goal was to influence Russian political thinking through those that surround Putin, said

and one of the letter’s authors. The pledge made an exception for the transport of medicines.

Drugmakers have also said they are working to protect their employees and ensure their medicines reach Russian patients.

So far, companies haven’t reported significant disruptions to their supply chains or operations in Russia. Official sanctions haven’t targeted health products. Yet sanctions are forcing companies to scramble to provide their products and are likely to create more disruptions down the road, according to supply-chain experts and industry officials.

European, Canadian and U.S. airlines have stopped operations to Russia in response to the invasion and airspace bans, cutting off airfreight options. Major shipping companies have suspended cargo routes to the country, closing off another trade route.

“The sanctions can and likely will impact the pharmaceutical products in Russia,” said Julie Swann, a North Carolina State University professor of industry and systems engineering, pointing to the reduced sea and air cargo. Companies will likely use alternative ways to transport medicines into Russia, she said, possibly through countries like China and India.

Goods can get into Russia by road, but many pharmaceutical companies previously sent their goods through Ukraine, said Koen Berden, director of international affairs at the European Federation of Pharmaceutical Industries and Associations.

To reroute trade through, say, Belarus, companies need to put in place new procedures to deal with different customs and other regulatory requirements, Dr. Berden said: “The circumstances are very challenging.”

Prashant Yadav, a supply-chain expert at the nonprofit Center for Global Development, said it would be difficult for U.S. companies to continue providing medicines and serving the Russian market unless they work with additional intermediaries in the supply chain that will manage supply and transactions.

—Evan Gershkovich contributed to this article.