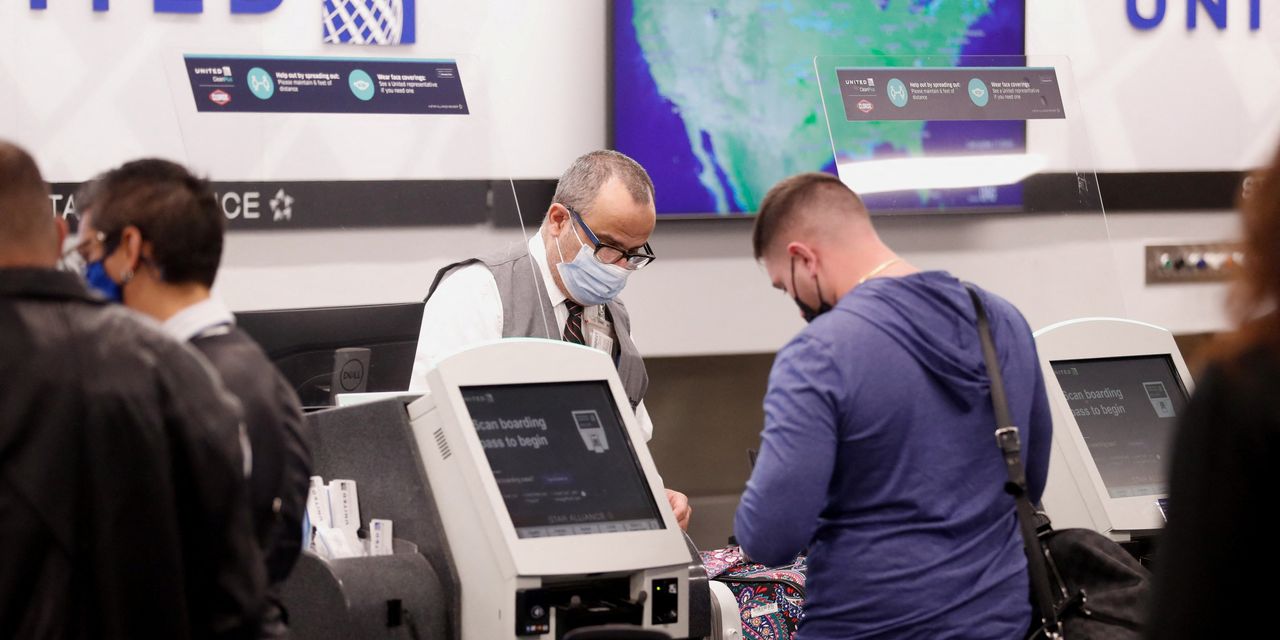 
said the emergence of the Omicron variant of Covid-19 dented near-term bookings and will slow its recovery, but said the setback is likely to be temporary.

The Chicago-based airline is scaling back its schedule in the first months of the year as it grapples with the new variant’s impact on travel demand. United said it now expects to fly less this year than it did in 2019, instead of the 5% growth it had previously anticipated.

Still, robust holiday travel demand drove United’s fourth-quarter revenue to $8.2 billion, down nearly 25% from the same period in 2019 but the highest quarterly total since before the pandemic began to decimate travel demand. United on Wednesday reported a loss of $646 million for the fourth quarter, and $1.96 billion for the year. The airline’s adjusted fourth-quarter loss of $1.60 a share was less than the $2.09 a share loss analysts had expected.

United said bookings for this spring and beyond remain strong and that its expansion plans have merely been delayed until later in the year. The airline still plans to ramp up flying in 2022 as it returns its Boeing 777 jets to service, after they had been sidelined for nearly a year as regulators reviewed proposed fixes for the aircraft’s engine covers.

“The United team has been fighting through unprecedented obstacles to, once again, overcome the new and daunting challenges that COVID-19 is bringing to aviation,” United Chief Executive

said in a statement Wednesday. “While Omicron is impacting near term demand, we remain optimistic about the spring and excited about the summer and beyond.”

United said its reduced schedule will help drive its unit costs excluding fuel higher than it previously anticipated—up 14% to 15% from the first quarter of 2019. Steeper costs for labor and fuel have concerned airline investors in recent months. United said it expects its jet-fuel prices to rise by about 10 cents a gallon in the first quarter from the end of 2021.

also said last week that it expects Omicron to weigh on travel appetite in the first three months of the year, but said it expects to start turning a profit again in March as travel demand regains momentum.

The Omicron variant has posed an operational challenge for airlines as well as a financial one. Airlines canceled thousands of flights over the Christmas holiday and in the early weeks of the new year as Covid-19 infections thinned out staffing and winter storms further disrupted operations. United had previously said it would pare back its near-term schedule to make sure it had enough staff. The airline said last week that at one point, around a third of its staff at Newark Liberty International Airport had called out sick.

Airline operations have since stabilized, though carriers have faced fresh concerns about the impact of new enhanced 5G wireless signals, due to flight restrictions intended as safeguards to protect aircraft from possible interference from the new service.

On Wednesday, when wireless carriers began beaming the signal to customers, flight impacts were relatively muted following an agreement by AT&T and Verizon to exclude 2-mile zones around airport runways from their 5G launches.