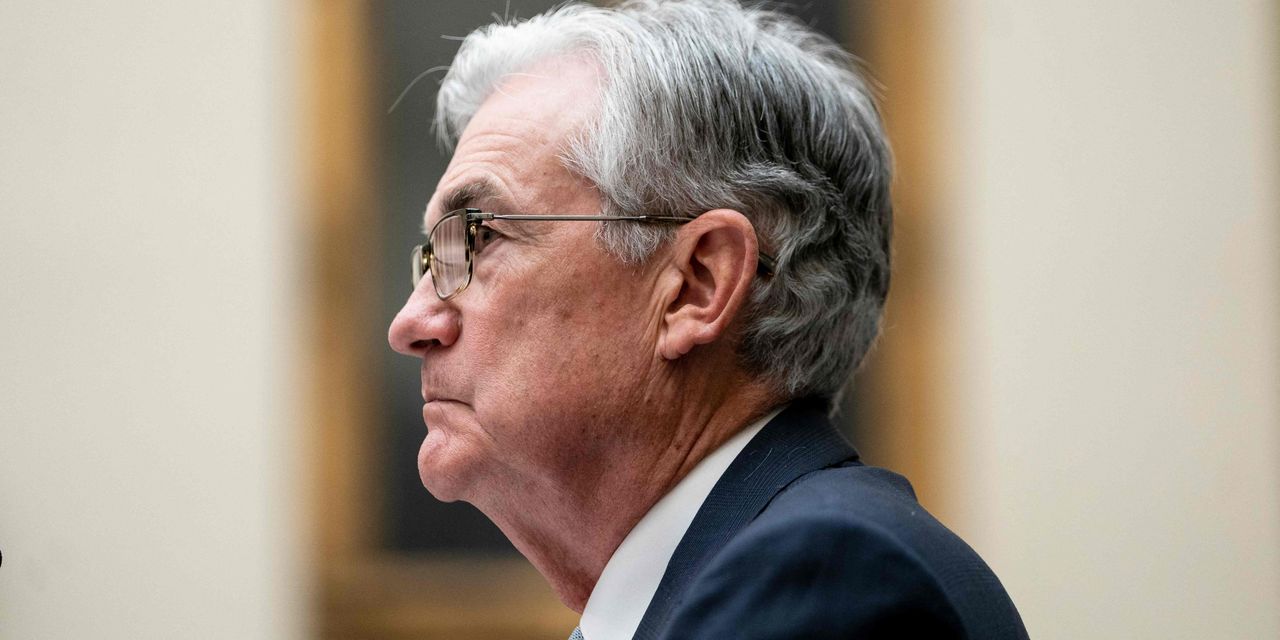 For the Federal Reserve, the hits driving inflation keep piling up.

Escalating sanctions by the West to punish Russia for its war against Ukraine are driving fears that an episode of increased inflation, already at its highest levels in 40 years, will become harder to wring out of the U.S. economy without a recession.

had begun laying the groundwork for a more aggressive series of rate increases, driven by concerns that labor markets were overheating. He and his colleagues were also banking on getting an assist from recovering supply chains later this year, limiting how far rates would have to rise.

Now, the global economy faces the prospect of higher energy and commodity prices, which will raise the costs to transport and manufacture a range of goods, while the conflict further disrupts global shipping networks. “The war makes inflation more intractable,” said Steven Blitz, chief U.S. economist at TS Lombard, a research firm.

The threat is unlikely to alter what the Fed does at its meeting this week. Mr. Powell said earlier this month that the central bank wants to avoid adding to volatility at a time when geopolitical uncertainty has already raised the risk of a sharp pullback in risk-taking by investors.

He signaled that the Fed would kick off an expected series of rate rises this week with a quarter-percentage-point increase, rather than a half-point, which a few Fed officials had floated and some investors had said would be appropriate. But he hinted that a series of shocks, including the Russian invasion, could keep inflation uncomfortably high, potentially calling for larger rate rises this summer.

Economists say there’s a growing risk that Mr. Powell could feel great pressure to lift rates to levels that ultimately tip the economy into recession. “It’s a very difficult path for the Fed to guide inflation back to target without triggering a downturn, and the path got even narrower with this latest supply-side shock we’re seeing,” said Matthew Luzzetti, chief U.S. economist at Deutsche Bank.

Renewed pandemic lockdowns in China in recent days are adding even more disruptions to the battered supply chain.

The inflation threat for the Fed is twofold. The first risk is that the surge in prices could become intense enough or last long enough to change consumers’ and businesses’ inflation psychology, making those expectations self-fulling. If workers anticipate a robust inflation rate in a year’s time, they will be more likely to push for higher wages now.

The second risk is that a tight labor market, with demand for workers far outstripping the supply, generates wage growth that keeps inflation above the Fed’s 2% target.

Those two forces threaten to ignite an inflationary spiral, where workers face higher prices and demand more pay, leading businesses to continue raising prices. “If this inflation is going to last in a problematic way, that has to be the mechanism,” said David Mericle, chief U.S. economist at

He now expects core inflation, which excludes food and energy, using the Fed’s preferred gauge, of 3.7% this year, versus an earlier forecast of 3.1%. It was 5.2% in January.

A separate measure of inflation, the 12-month change in the consumer-price index, rose to 7.9% in February, the highest since 1982, the Labor Department reported on Thursday.

Even before the war, business executives had planned to keep raising prices this year, after disrupted supply chains collided with strong consumer demand, sending inflation rising.

“We went into this year across our entire portfolio—without this conflict in mind—knowing that we were facing commodity price increases [and] shortages. So we had a very healthy level of inflation or cost increases built into our plan. That’s probably gotten a little steeper over the last couple of days,” said

at an investment conference last week.

, said at a separate conference last week that the company raised its prices four times last year, compared with once or twice in a normal year.

“Clearly, what happened last year is not normal, and this year is not going to be normal from an inflationary standpoint either, so we’ll have to do it more frequently,” he said. “We didn’t fully recover last year from inflationary cost increases. So the plan is to continue to raise our prices until we recover.”

Already, higher oil prices are pushing up the cost of U.S. gasoline, which hit a record, unadjusted for inflation, last week. One rule of thumb holds that a $10-per-barrel rise in the price of oil increases overall U.S. inflation by 0.4 to 0.5 percentage points. That means inflation is likely to rise in coming months.

Higher oil prices are also likely to depress consumer demand by funneling money away from other purchases. That, however, isn’t likely to alter the Fed’s rate plans because officials have seen the economy growing faster than its long-run potential this year and unemployment falling to levels that have historically signaled overheating.

Central bank textbooks see supply shocks’ effect on inflation as transitory so long as the public doesn’t expect permanently higher future inflation. In the 1970s, expectations weren’t as stable, and oil shocks in 1973 and 1979 fed into broader inflation. But according to consumer surveys and market-based measures, inflation expectations have been relatively stable since the 1990s, taking the sting out of oil shocks in 1990 and 2003.

The question is whether 2022 will be more like the shocks of the 1970s or the more recent episodes. “A number of factors suggest this is a far more persistent inflation shock than initially thought,” said Mr. Luzzetti. “They’re broadening significantly, they’re more demand-driven, and we’re seeing significant wage pressures.” A critical factor, he said, is to what degree long-term inflation expectations will change amid large increases in items like gas prices.

At the end of last year, many Fed officials thought they might only need to raise rates to a neutral level, one that neither spurs nor slows growth. Most officials estimate neutral is between 2% and 3% when underlying inflation—stripped of idiosyncratic influences such as from supply shocks—is at the Fed’s 2% target.

But if underlying inflation rises—say, to 3%—that would require the Fed to raise rates even higher—to between 3% and 4%—to reach that level. Mr. Luzzetti has produced a model, based on research the Fed published last year, that suggests such underlying inflation has risen to around 2.8% in January, from 2.2% last June.

That would simply take rates back to where they usually stood in the two decades before the 2008 financial crisis. It would still be a rude surprise to investors counting on perpetually low inflation and interest rates. Adjusting to an era of higher rates could spark large declines in asset prices and increased volatility.

“After several decades in which economic, financial, or political shocks invariably caused interest rates to fall, markets may have to re-learn that the opposite can also be true,” said Goldman chief economist

in a recent report.

Should the Fed be prepared to raise rates to levels that risk a recession in order to control inflation? Join the conversation below.

Fed officials and many private-sector economists misjudged inflation last year. All through last spring and summer, they remained confident that underlying inflation was still in the same 2% range that had prevailed since the 2008 financial crisis because they thought increases in actual inflation came from supply-chain bottlenecks. Officials hoped those bottlenecks, which had produced extreme price increases for a handful of items such as cars, would resolve themselves in a few months.

By last November, signs multiplied that demand was adding to inflationary pressures. Price increases were broadening and heating up in the service sector, which accounts for a greater share of U.S. spending. Mr. Powell moved up the Fed’s plans to withdraw stimulus and put the central bank on track to begin raising rates this month. “Hindsight says we should have moved earlier.… But there really is no precedent for this,” Mr. Powell told lawmakers earlier this month.

Much of his concern was fueled by a rapid recovery in labor markets, which could put pressure on wages. As of January, the combination of unfilled and filled jobs has exceeded the total number of workers by the largest margin since World War II, according to an analysis by Goldman Sachs.

Officials had hoped that as the pandemic ebbed, supply bottlenecks and labor shortages would gradually ease. Underscoring that optimism about a return to normalcy: All of the 12 Fed bank presidents and four governors who participate in the central bank’s regular rate-setting meetings will gather in person in Washington, D.C., this week. That hasn’t happened since January 2020.

In just the past few weeks, investors have sharply raised near-term expectations of inflation. They see it at 5.6% in the coming 12 months, according to a new daily index released by the London-based ICE Benchmark Administration, up from 3.5% on Feb. 1. The index is based on trading in the roughly $300 billion-a-month market for inflation-protected U.S. Treasury securities and the $100 billion market for a separate derivative known as inflation swaps.

Measures of inflation anticipated over a longer horizon have been more stable, though they too have drifted higher. Investors expect inflation to average 2.9% between 2023 and 2028, and 2.6% over the five years ended 2032, according to the ICE Benchmark Administration.

Alan Detmeister, an economist at UBS who used to lead the prices and wages section of the Fed, said he has been surprised by the strength of consumer demand, which hasn’t shown much signs of diminishing after enhanced unemployment benefits and other pandemic-related aid expired last year.

A limited supply of homes and apartments, combined with steady job gains, have sent housing vacancy rates to their lowest levels in decades. Rents increased at a 5.5% annualized pace over the last six months, the largest increase since 1986, the Labor Department reported last week.

Along with rents, higher prices for services such as restaurant meals, dry cleaning and haircuts, where labor is the primary cost, tend to be stickier, or slower moving. Excluding housing, such service inflation ran at a 2.5% to 3% pace in the years before the pandemic but has recently run closer to 4%. Mr. Mericle said it would be worrisome if that pace persists once the boost from the reopening of the economy fades.

Like many forecasters, Mr. Mericle felt confident last year that longer-term inflation expectations were “anchored,” making it easier to dismiss a spike in prices lasting no more than one year. But a string of higher readings in coming months makes it “more legitimate to worry this will become more ingrained,” he said.

If inflation expectations were to move higher, Mr. Powell will face a difficult choice between tolerating sustained higher inflation or raising rates by enough to tip the economy into a recession.

(R., Ala.) pushed Mr. Powell at a hearing on March 3 to say whether he would follow the example set in the 1980s by former Fed Chairman Paul Volcker, who opted for the latter course.

Mr. Powell began by praising Mr. Volcker. Then he signaled his willingness to tolerate a recession to defeat inflation. “I would hope history will record that the answer to your question is yes,” Mr. Powell said.