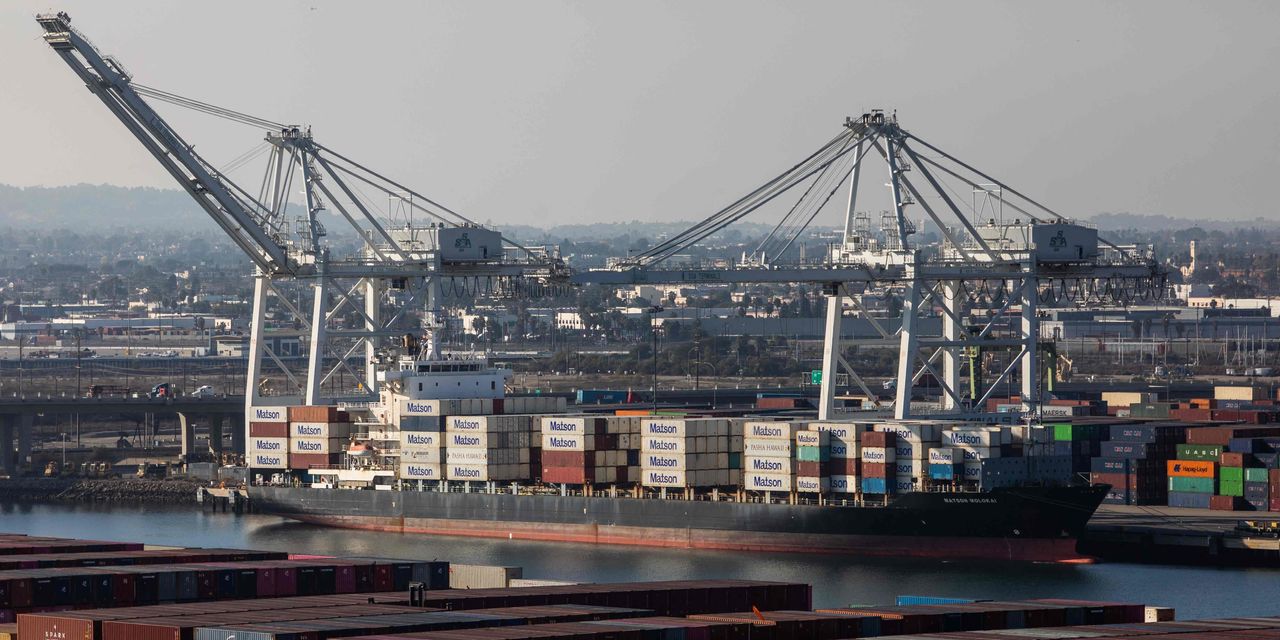 The Covid-19 Omicron variant is hampering efforts to clear a backlog of about 100 container ships at the nation’s busiest port complex as infections rise among Southern California dockworkers.

About 800 dockworkers—roughly 1 in 10 of the daily workforce at the ports of Los Angeles and Long Beach—were unavailable for Covid-related reasons as of Monday, according to the Pacific Maritime Association. Absentees included workers who tested positive for the virus, were quarantining or awaiting test results, or who felt unwell.

Top news and in-depth analysis on the world of logistics, from supply chain to transport and technology.

The association, which secures labor for terminal operators on the West Coast, said the number of daily worker infections has risen rapidly in recent weeks, escalating from several cases a day to dozens and then hitting about 150 a day last week.

The shortfall meant that on Monday two container ships at the port complex received fewer dockworkers than requested and 13 ships didn’t receive any requested workers to load or unload cargo, effectively halting operations. That same day, 102 container ships waited for a berth at the port complex, according to the Marine Exchange of Southern California, which monitors ship movements in the area.

Dozens of vessels have waited weeks or months to unload cargo at the ports of Los Angeles and Long Beach as a crush of imports has overwhelmed logistics operations that deliver goods to U.S. markets. The backlog rose to 100 ships in late November and reached a record 106 vessels on New Year’s Day. Before the pandemic it was unusual for more than one ship to wait for a berth.

chief executive of Yusen Terminals LLC at the Port of Los Angeles, said the rise in coronavirus infections has extended a worker shortage that began over the Christmas and New Year holidays, reducing productivity at his terminal by about 20%. “It’s just going to prolong the catch-up,” he said.

Dockworkers helped move record cargo volumes last year and are just as susceptible to Covid infections as other workers, said

an official with the International Longshore and Warehouse Union, which represents West Coast port workers. Los Angeles County, where many port workers live, logged 200,000 positive coronavirus cases for the week that ended Jan. 8, a record.

The labor shortages in Southern California come as surging Covid-19 cases ripple through global supply chains, slowing production at U.S. factories and shutting factories and clogging ports in China. Denmark-based marine consulting firm Sea-Intelligence ApS said in a report Tuesday that congestion and bottlenecks are worsening at ports in the U.S. and Europe.

The Southern California port complex is the main ocean gateway for U.S. imports from Asia, handling about 40% of containerized cargo. The ports struggled last year to handle record import volumes that surged about 20% compared with pre-Covid levels in 2019 as businesses rushed to restock inventories and Americans switched their pandemic-era spending from services to goods.

The Biden administration last year took measures aimed at reducing the backlog, including efforts to prod Southern California terminals to move toward 24-hour operations that had limited success.

said in a statement that the port’s terminals remain open and continue to offer some extended hours despite the increase in worker infections. The Port of Los Angeles referred questions about labor shortages to the Pacific Maritime Association.

the association’s chief executive, said terminals might be able to catch up on some of the work backlog if factories in Asia reduce operations during the Lunar New Year, which begins in a few weeks. But he cautioned that most of his members, who include the world’s largest ocean carriers, expect the cargo surge to continue through the next six months, if not through the end of 2022.