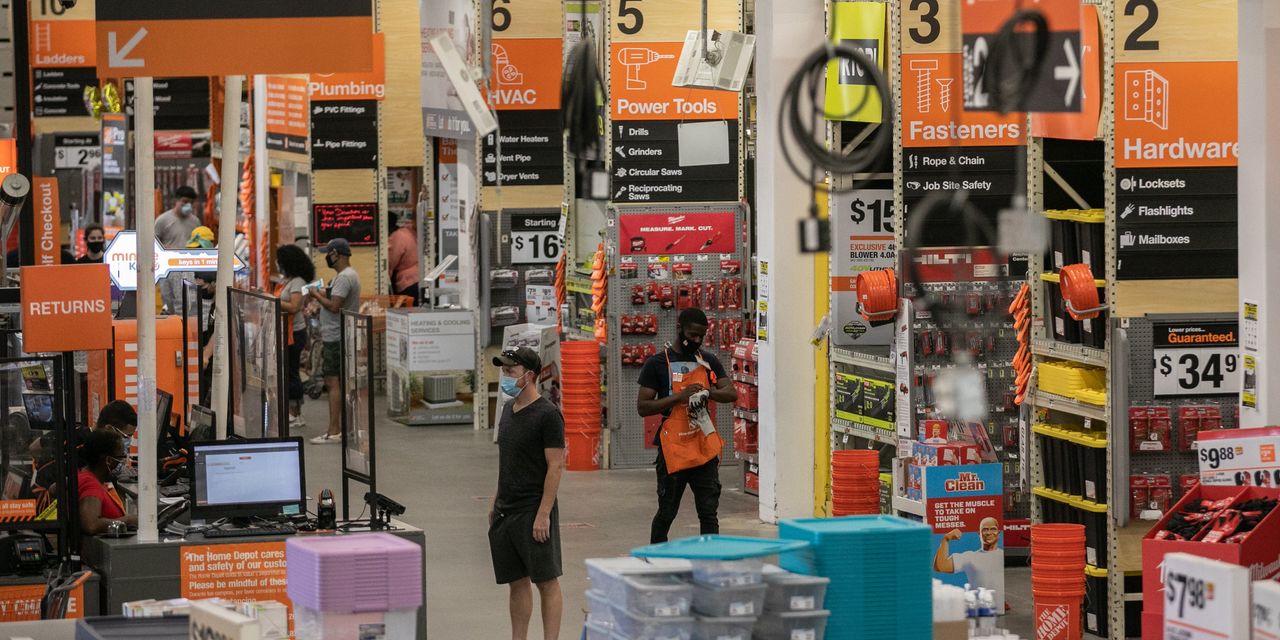 Stores, gasoline stations, auto dealers and other retailers added a seasonally adjusted 249,000 jobs in August, the Labor Department said Friday. Almost half the growth occurred at general-merchandise stores, a category that includes large employers such as

and Costco Wholesale Corp. Vendors of electronics, appliances, furniture and garden supplies were among those that added jobs last month.

Retailers have now added back 1.7 million of the 2.4 million jobs they shed in March and April, during widespread shutdowns of economic activity to stem the spread of coronavirus infections.

“It’s encouraging to see retailers bring back these jobs,” said Sonia Lapinsky, a managing director in the retail practice at consulting firm AlixPartners. “Stores are opening and we’re seeing some pent up demand. Still, you need to put it in perspective against the millions of jobs lost this spring.”

Mall-based retailers and clothing stores have suffered deep job losses. State authorities ordered many of them to close this spring, and demand for their products has been softer even after reopening as many Americans working from home opt for pajama bottoms or shorts over dress slacks. Employment at clothing stores is down nearly 30% from February.

However, employment at general-merchandise retailers, such as supercenters and warehouse stores, was up 10% in August from February’s prepandemic levels.

boosted their employment 6% from February.

Consumers have also relied on

and other online retailers, which has led to hiring in transportation and warehousing. In August and September, Amazon announced plans to hire 20,000 people in seven cities across the U.S. and in the U.K

And many traditional retailers have proven to be nimble in turning bricks-and-mortar stores into fulfillment centers and locations for curbside order pickup, said Robert Frick, corporate economist at Navy Federal Credit Union.

Grocery stores and mass retailers that sell food and other essentials largely remained open throughout the pandemic and saw strong demand.

Overall retail spending, excluding restaurants, was up 5.8% in July from a year earlier, according to the Commerce Department. That has been driven in part by substantial government financial assistance in the forms of $1,200 checks and enhanced unemployment benefits, which expired at the end of July.

Moreover, some retailers are benefiting as Americans shift their spending toward electronics, housewares and food and drink at home, and away from travel and dining out.

Congress hasn’t taken action on additional stimulus measures this summer, and without them consumer demand and retail employment could slump.

“We’ve been coasting on improved savings” from stimulus payments, Mr. Frick said. “The lack of additional support will eventually hurt demand…It’s going to get harder from here on in to increase employment.”

The recent gains come with some caveats.

Seasonal adjustments to the data could be making the reported retail job numbers look stronger than reality. August is typically a month of flat or decreased employment, before a fall ramp-up, but the pandemic has thrown normal seasonal patterns off course.

And retail jobs are typically hourly and less permanent by nature. If consumer spending slumps, employment in the sector could retreat more quickly than other parts of the economy, said Josh Wright, chief economist at Wrightside Advisors.

Appeared in the September 5, 2020, print edition as ‘Retailers Step Up Hiring as More Shoppers Return.’