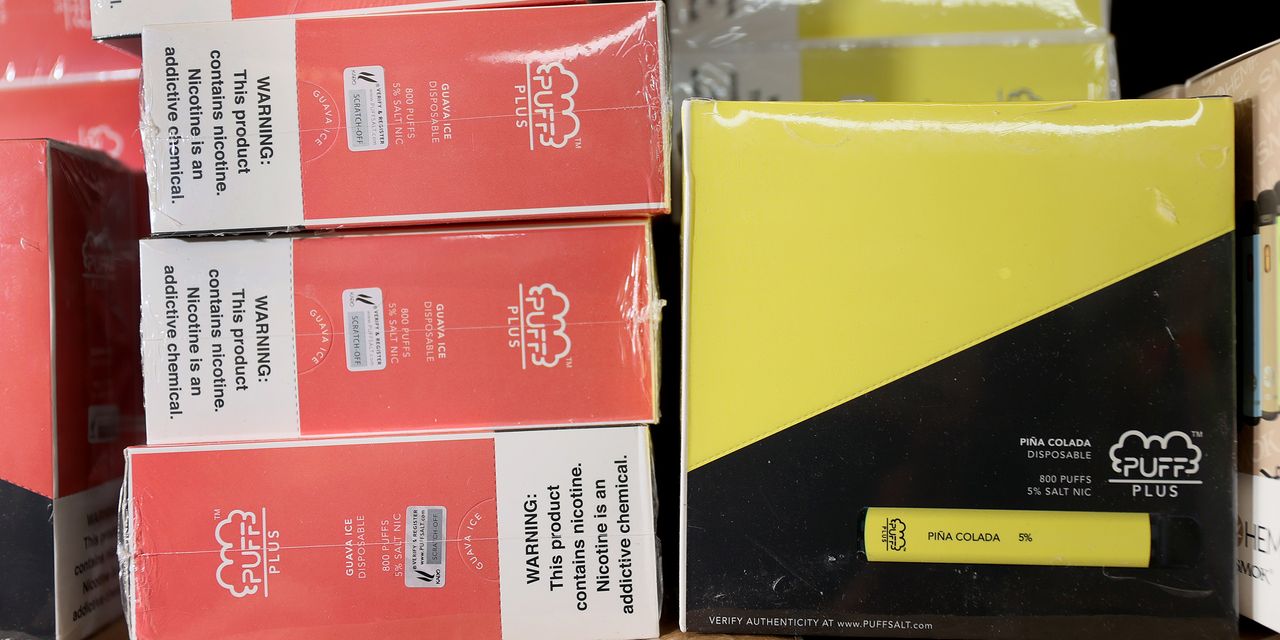 The Food and Drug Administration will gain authority over Puff Bar and other e-cigarettes made with synthetic nicotine under the government spending bill expected to be signed by President Biden.

The bill closes a loophole that allowed Puff Bar to stay on the market—and soar in popularity among teenagers—despite an order from the FDA to stop selling its fruity, disposable vaporizers. After the agency’s order in 2020, Puff Bar reformulated its products to use nicotine that wasn’t derived from tobacco. The FDA regulates tobacco products and smoking-cessation devices such as nicotine gum, but synthetic-nicotine vaporizers haven’t fallen under its jurisdiction, until now.

Lawmakers and public-health groups increased calls for an end to the loophole after a federal survey released in September showed that Puff Bar had become the most popular e-cigarette brand among middle- and high-school students. Under the bill, the company has 60 days to submit its products for FDA review or halt sales.

Puff Bar didn’t respond to a request for comment. Its co-Chief Executive Officer

previously told The Wall Street Journal that Puff Bar would comply with any new regulation barring its products.

“We’ll never break the law, or if there was a regulation that came out tomorrow saying no synthetic nicotine, no flavors on the market tomorrow, we would comply,” he said in a November interview.

Get a weekly briefing about the coronavirus pandemic and a Health newsletter when the crisis abates.

Because of federal restrictions on flavored e-cigarettes, reusable devices made by companies like Juul Labs Inc. are available only in tobacco and menthol flavors. Puff Bar sells a wider selection of flavors, including Watermelon, Lemon Ice and Blue Razz. They are sold online and in stores for as little as $9 apiece.

Several other e-cigarette companies switched to synthetic nicotine last year after the FDA ordered them to halt sales of their products as part of a sweeping regulatory review of the vaping industry. The agency’s mandate is to authorize vaping products only if their manufacturers can demonstrate that they are in the interest of public health. The FDA is weighing, among other things, the potential good of adult cigarette smokers switching to a less-harmful option versus the potential harm of young people getting hooked on nicotine.

Among its decisions so far, the FDA has ordered off the market more than 900,000 flavored products, including vaping liquids with flavors such as apple crumble, cola and cinnamon toast cereal.

One company that switched to synthetic nicotine was Breeze Smoke LLC, which unsuccessfully appealed to the Supreme Court for a stay of the FDA’s ruling. On its website, it now sells disposable vaporizers with “tobacco-free nicotine.”

On its own, nicotine hasn’t been linked to cancer, but it does hook people on cigarettes, which are associated with 480,000 deaths in the U.S. each year, according to U.S. health officials. The health effects of synthetic nicotine haven’t been widely studied. There is concern among some scientists and industry experts that consumers may perceive it to be less harmful than nicotine derived from tobacco.

“Some bad actors have attempted to avoid FDA regulation by pivoting to using synthetic nicotine in their products,” House Energy and Commerce Committee Chairman

(D., N.J.) said in a statement. “That ends with passage of this bill, which will close this loophole and clarify FDA’s authority to regulate all tobacco products, including those containing synthetic nicotine.”

Appeared in the March 14, 2022, print edition as ‘Scrutiny of E-Cigarette Makers to Rise.’