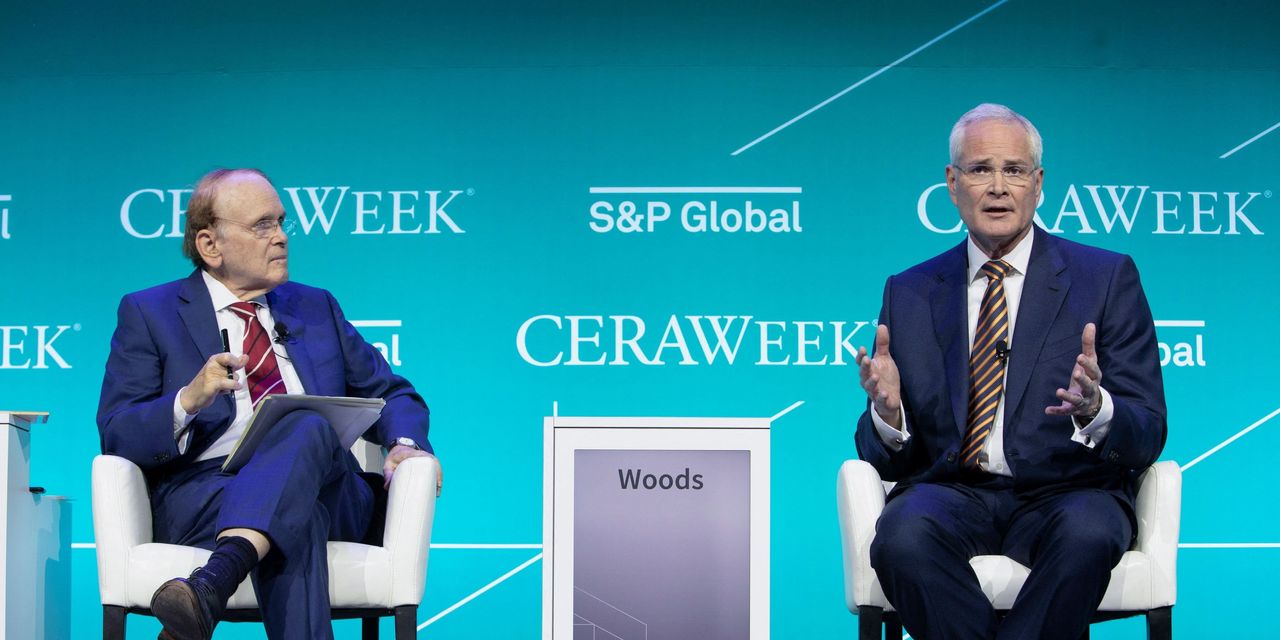 HOUSTON—The chief executives of some of the world’s largest oil companies and U.S. government officials warned Monday that there were no quick-fix solutions to the higher energy prices and market volatility that have followed Russia’s invasion of Ukraine.

The chief executives of


and presidential climate adviser John Kerry said there was no immediate relief in sight as oil prices top $120 a barrel, and even higher energy prices and global economic disruption were likely.

“The volatility of price, and with supply and demand, is something we’re going to live with for a little while here in the midst of this,” Mr. Kerry said Monday at CERAWeek by S&P Global, an annual energy conference that gathers top industry executives and government officials.

Speakers at the event, which took place in-person for the first time in two years following the pandemic, had expected to focus on climate change and a nascent energy transition before Russia invaded Ukraine. But the war has roiled commodity markets, increased tensions between Moscow and the West and led to Russia being unplugged from much of the global financial system.

Crude prices temporarily shot close to $140 a barrel Sunday, and hovered around $120 a barrel Monday, following a weekend statement by Secretary of State

that the U.S. and European partners were discussing a ban on Russian oil imports. If enacted, an embargo would mark a significant change in the West’s response to Moscow’s war on Ukraine. Washington and allies have imposed punishing sanctions on Russia’s financial system and elite, but so far have skirted energy exports for fear of pushback from voters over gasoline and heating bills.

said the market shocks reflected the interconnectedness of the global energy system, which makes the removal of any source of supply reverberate around the world.

“Global energy markets have been rocked and people everywhere are worrying about the availability and the affordability of energy,” Mr. Woods said.

According to Mr. Woods and his peers at the conference, one solution to the crisis is to invest more in oil and gas production.

Investment in oil and gas plummeted over the last two years after the global pandemic crushed fossil fuel demand and pressure mounted from Wall Street, government officials and others to curb greenhouse gas emissions. Demand has returned as the world’s economies open from quarantines and other restrictions, but supply has been unable to keep pace.

Select breaking and enterprise stories about energy markets and businesses, through news alerts delivered to you via email.

The potential loss of Russian barrels is exacerbating an already tight market, the CEOs said.

said that government officials and investors need to be more realistic about displacing fossil fuels and learn from the current volatility that the world still relies on oil and gas.

“The focus really should be on energy security and oil and gas have a vital role to play in the global economy,” Mr. Hess said. “Oil and gas are needed for decades to come and the key challenge to oil and gas is investment.”

Mr. Hess also said that the U.S. and other major oil-consuming nations need to quickly release additional barrels of oil from their emergency stockpiles. The U.S. and other members of the International Energy Agency, a Paris-based group that includes the U.S., Japan and much of Europe, said last week that they would release 60 million barrels of oil from strategic reserves. Mr. Hess said the planned releases aren’t enough.

said companies including his must balance investments in hydrocarbons and renewables, and learn from the current crisis. Europe was too quick to cut oil and gas investment, he said: “Unfortunately, demand is going up.”

Mr. Woods said he was in regular contact with government officials world-wide, helping them to understand the impact of policy decisions on energy markets. Exxon said last week it would shut down production from an oil-and-gas project it runs on Sakhalin Island in Russia’s Far East. In conversations with Exxon executives, Biden administration officials have expressed concerns about the market impact of the exits from Russia by Exxon,

CEO of Malaysian oil and gas giant Petronas, said investors and government officials need to work collaboratively with industry to address the current energy crisis while mitigating the affects of climate change.

“We’re not the villains. we’re part of the solution,” Mr. Taufik said. “You need to shepherd us, not beat us into submission.”

the Secretary-General of the Organization of the Petroleum Exporting Countries, defended the recent decision by OPEC and its allies, which includes Russia and is collectively known as OPEC+, to continue raising oil production by 400,000 barrels per day each month. He said the group had a history of staying out of geopolitics and not allowing conflicts involving its member countries to disrupt the work of bringing stability to the oil market.

In an apparent reference to the Iraq-Iran War of the 1980s, Mr. Barkindo recalled watching as delegates from those two OPEC countries sat next to each other and worked together.

“Those two countries, they sat down, and we [made] decisions, and they went back to their battlefield,” until the end of the conflict, Mr. Barkindo said.

—Timothy Puko and Jenny Strasburg contributed to this article.