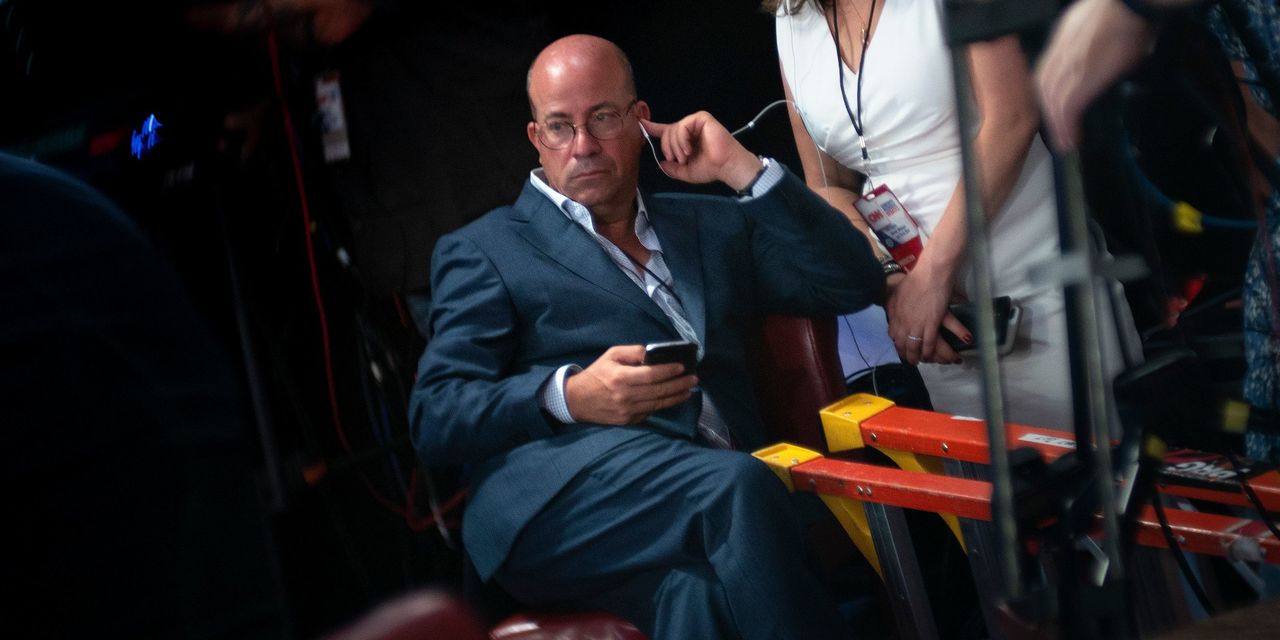 appeared to close a messy chapter in the cable news network’s history in December when he fired anchor Chris Cuomo after an investigation into his efforts to help his brother, New York Gov.

respond to allegations of sexual harassment.

The drama was far from over.

Mr. Cuomo’s legal team then contacted the cable news network to collect severance he feels he is owed, people familiar with the matter said. In the course of those talks, Mr. Cuomo’s legal team said they believed CNN was applying its policies inconsistently, citing that Mr. Zucker hadn’t disclosed a relationship he was having with a top aide, the people said.

Mr. Zucker resigned Wednesday, acknowledging he had failed to disclose the relationship, violating a policy that bars employees from supervising co-workers with whom they have a personal relationship. The colleague Mr. Zucker referred to is Allison Gollust, an executive vice president and chief marketing officer at CNN.

In an email to staff announcing his resignation, Mr. Zucker said he disclosed the relationship to investigators, who continued to probe Mr. Cuomo’s employment at the network after the anchor’s departure. Ms. Gollust said she regretted failing to disclose the relationship earlier.

Days after he fired Mr. Cuomo on a December Saturday—a termination that happened over the phone—Mr. Zucker told CNN employees that the network wouldn’t pay Mr. Cuomo a severance, The Wall Street Journal reported at the time. He also said he had decided to fire Mr. Cuomo after he found out that the former anchor had been helping his brother Andrew Cuomo to a greater degree than what Chris Cuomo had told CNN executives.

Chris Cuomo hired lawyer Bryan Freedman, who contacted CNN to discuss severance Mr. Cuomo felt he was owed, the people said. During discussions with CNN about Mr. Cuomo’s severance, Mr. Cuomo’s legal team brought up examples of ways in which they believed the company had applied its policies inconsistently, including in the case of Mr. Zucker and Ms. Gollust’s relationship, the people said.

One executive familiar with Mr. Cuomo’s contract said the former anchor could be owed as much as $18 million.

Mr. Cuomo’s legal team in recent weeks asked CNN executives, including Mr. Zucker and Ms. Gollust, to retain records of their communications, some of the people said. Mr. Cuomo’s lawyers believe those records could vindicate the former anchor by showing he was transparent with his superiors, including Mr. Zucker, about his efforts to help his brother, one of the people said. Puck earlier reported that CNN executives were asked to retain records.

decided to remove him as president of CNN within days.

The abrupt resignation of Mr. Zucker, who had been at the helm for nine years, comes at a particularly challenging time for CNN. The network, which has been grappling with declining ratings of late, is on the verge of launching CNN+, an ambitious direct-to-consumer streaming service.

The network will also soon be under new ownership. WarnerMedia, a unit of

is to be spun off and merged with

to form a new company, Warner Bros. Discovery. Mr. Zucker had indicated he planned to stay at CNN at least through the closing of the deal.

“I know this isn’t an ideal time,” Mr. Kilar told a group of CNN employees during a question-and-answer session in Washington, D.C., on Wednesday night, referring to the timing of Mr. Zucker’s departure. “Our values precede any business consideration.”

Many CNN employees who attended that session said they felt Mr. Zucker wasn’t given a second chance after disclosing his relationship with Ms. Gollust. Mr. Kilar declined to answer questions about the timeline of Mr. Zucker’s departure, though he said that he followed a process “with an appropriate sense of urgency.”

Mr. Kilar also said that the investigation into Chris Cuomo had concluded. Mr. Cuomo’s legal team had been told any severance negotiations could only begin once the probe was over, a person familiar with the situation said.

During the session, anchor Jake Tapper referred to Chris Cuomo’s lawyer, who he said seemed eager to leak damaging information about Mr. Zucker unless the company gave Mr. Cuomo severance.

“An outside observer might say, ‘Well, it looks like Chris Cuomo succeeded,’ ” Mr. Tapper said. “He threatened. Jeff said we don’t negotiate with terrorists. And Chris blew the place up. How do we get past that perception that this is the bad guy winning?”

Many of CNN’s highest-profile anchors have been hired or promoted by Mr. Zucker, including Mr. Tapper, “Reliable Sources” anchor Brian Stelter and prime-time anchor Don Lemon. As CNN’s business head and de facto programmer-in-chief, Mr. Zucker has been a hands-on leader, running daily news calls and spearheading contract negotiations with anchors, instilling a deep sense of loyalty among many.

One of Mr. Zucker’s first hires when he joined CNN in 2013 was Chris Cuomo, who was recruited from ABC News to co-anchor a morning news show. Mr. Zucker promoted Mr. Cuomo to prime time in 2018, giving him the coveted 9 p.m. hour. A year later, Mr. Zucker praised Mr. Cuomo’s pugilistic instincts to the Hollywood Reporter, calling him “the perfect cable news anchor.”

The relationship between both men came under strain last year when allegations that Mr. Cuomo had participated in strategy sessions with Andrew Cuomo and his aides came to light in May. Mr. Zucker initially stood by the anchor, who remained on the air.

In August, New York Attorney General Letitia James released a report that said Andrew Cuomo sexually harassed multiple women in violation of state and federal laws, prompting his resignation as governor later that month. That report from Ms. James’s office also confirmed that Chris Cuomo had aided Andrew Cuomo’s response to his scandal. Then in November, her office released new records, including some of Chris Cuomo’s text messages, that showed that the anchor had given detailed feedback on his brother’s statements to the press and gathered information about upcoming stories involving his brother’s accusers.

More coverage, selected by the editors.