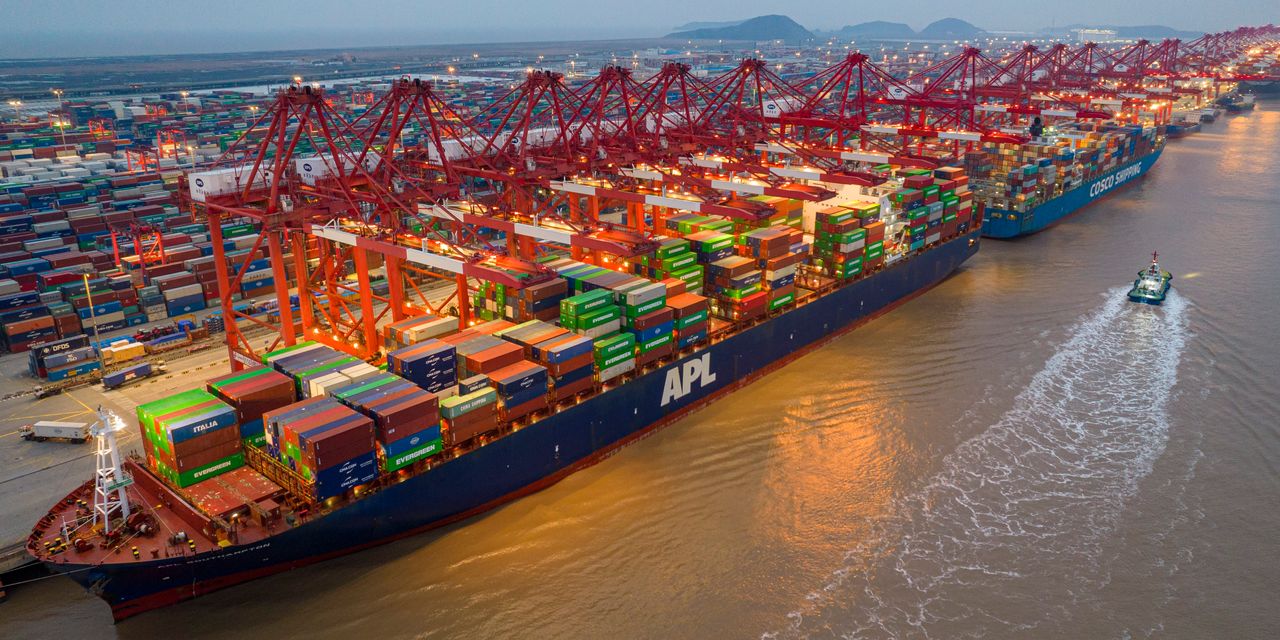 HONG KONG—China’s strong export momentum ebbed slightly in the first two months of this year as the pandemic-driven global boom in demand for the country’s goods fades, adding pressure on policy makers to prop up growth through further stimulus.

Exports in January and February rose 16.3% in dollar terms from a year earlier to $544.7 billion, according to data from the General Administration of Customs. While that beat expectations of a 15% gain among economists polled by The Wall Street Journal, it still marked a slowdown from the 20.9% year-over-year increase in December.

While China bought lower volumes of energy including coal, natural gas and crude oil, prices of those commodities have surged and could climb further as Russia’s invasion of Ukraine risks disrupting supplies.

Economists predict that China’s trade surplus, which soared to $676 billion last year and has propelled the country’s rapid rebound from the pandemic since 2020, will provide less support for its overall economy this year.

“It is nearly impossible for China to replicate such strong export momentum this year,” said

chief economist for China and North Asia at

The country’s trade surplus will likely shrink to around $480 billion this year as export growth continues to taper off and prices of commodities such as grains and energy surge, Mr. Ding said.

Factors that economists say may drag on export growth include the gradual reopening of other countries, reducing their reliance on China’s supply chains, and an expected imminent rate increase by the U.S. Federal Reserve. That would erode the spending power of consumers in the West, whose appetite for items including furniture and consumer electronics has fueled Asia’s strong exports since the start of the pandemic.

After expanding by 25% last year to reach a record $28.5 trillion, global trade growth is expected to slow during the first quarter of 2022, in part as more countries run down their pandemic stimulus packages, according to forecasts by the United Nations Conference on Trade and Development.

The war in Ukraine could exacerbate supply-chain bottlenecks and weigh on global recovery. It could hit in particular economies in the European Union, which is China’s second-largest trade partner. Standard Chartered recently cut its forecast for the region’s economic growth to 3.1% in 2022, down from 4%.

Any slowdown in the EU would damp demand for global goods and negatively affect China’s export-market outlook, said

chief China economist at Macquarie Group, adding that he predicts year-over-year growth in exports to slow significantly from last year’s 30% to a “high single digit” rate this year.

On Saturday the government set a growth target of around 5.5% for this year, an ambitious goal that paves the way for more aggressive fiscal and monetary support as the country continues to deal with headwinds in the domestic economy, including a property slump and sluggish recovery in consumption.

“With the Ukraine crisis imposing downside risk to global demand, China will have to rely more on domestic demand in 2022,”

chief economist at Pinpoint Asset Management wrote in a note Monday. “Now the pressure is on the fiscal policy to deliver.”

—Grace Zhu contributed to this article.